Talk Hard, which happens every Friday at midnight inside the ComedySportz Chicago theatre, is having a huge show this week. This unconventional talk show features crazy characters, great special guests, and a brand of comedy that's written by a crack team of the best comedian/writers in the Chicago scene. The list of staff writers really does read like a who's who of local comedic talent. Jamie Campbell the prolific host (TBS Just For Laughs, ABC, NBC), reached out and asked if we could plug the show and we agreed readily cause the lineup is pretty damn sick. Check out the press release and then get yourself a ticket!

Talk Hard, Chicago’s hit late-night, uncensored talk show is proud to welcome Lisa Marie Varon to The ComedySportz Theatre this Friday (March 1st) at midnight. Lisa is one of professional wrestling’s most decorated female competitors, having held the WWE Women’s Championship (under the ring-name Victoria) twice, and the TNA Knockouts Championship (under the ring-name Tara) a record-tying five times! Lisa Marie will be on-hand to talk about wrestling, life in Chicago, the opening of her new pizza restaurant in Lincoln Park, and more! 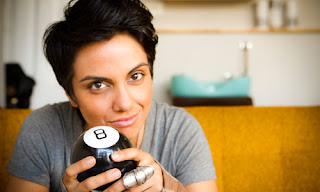 This action-packed show will also feature an appearance by internet sensation Kam Kardashian. Kam’s webseries is about the day-to-day adventures of the long-lost lesbian sister of a very famous family. She will be visiting Talk Hard to promote the premiere of the show’s second season. The first season can be viewed at kamkardashian.com.

This week’s show will also feature musical guest Danny Black. Danny’s former band, The Blacks (or, The Black Family), were a cult sensation. They released two albums with Bloodshot Records. Greg Kot of The Chicago Tribune said “they created a sound and put on a show like nobody else.” Danny will be performing solo, promoting his live-podcast The God, SEX, & Death Variety Hour that records monthly at The Hideout.

Tickets are $10 each and can be purchased at The ComedySportz Theatre box office. Call 773.549.8080 in advance or buy them at the door. Attendance to the 10p ComedySportz improv show gets audience members into Talk Hard at half price. Life is short – talk hard.