The Importance of Bombing, By:Bob Palos 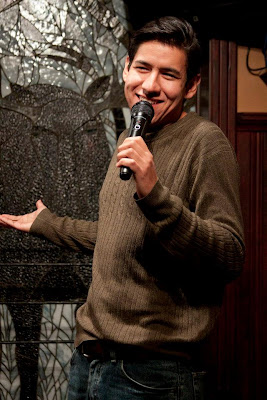 In my quest for stage time I've performed on a wide range of horrible stages almost to the point where I feel like I've developed a palate for bombs. There's the dead tired silence of the worn and restless, the drunk and unaware that you're even saying on stage of the boisterous music mic, the self involved silent performers waiting to go up ...too many to say really. They've all got their own flavor and like a fine scotch it all tastes like shit until you make yourself like them.

There was a time where the deafening silence or rambunctious rustling would send my brain into panic. The world would go white and I could no longer see what's in front of me. I'm not sure if those days are all together gone but they do get further between each other. There's been nights where I wasn't proud of how well I did but how well I bombed. There's some kind of pride to taking it like a big boy and standing tall to the burn.

Last month was probably the most fun bomb I had. Then again it was one of those situations where success wasn't even an option, so knowing that going into it, all you can do is ride the bomb. Just smile and hold your hands out like your surfing.

I was in my home town hoping bars around the holiday season with an old friend. Stand up comedy came into the conversation. Let's say she brought it up, but she wanted to know where I was going up so she could see. I made the joke, "is there a microphone anywhere?" The only problem is there was a microphone somewhere. There was a Karaoke mic that this friend could then sneak five dollars to the DJ and surprise me with a little stage time.

The idea was horrible but I stood true to my word. To the DJ's announcement, "We don't usually do this but here's comedian Bob."

Walking up to the stage there was a lull of silence as I felt the stare of drunks in holiday sweaters and Santa hats' eyes fill with tension. I didn't get three words into the microphone before, “Sign a song!” rang in from the crowd. “Trust me, I wish I could,” I tried to defend but the rucks had already begun to grow to much for me as other were beginning to shine in. 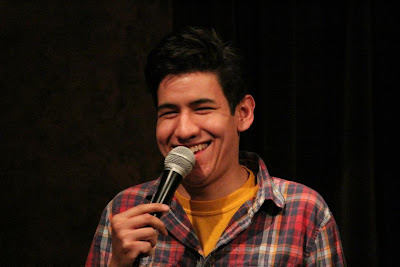 Two men came up dressed like Santa Claus and an Elf came into view. I don't know if their plan was to help me or mock me but I recall asking them where their Christmas spirit was.

Looking to my left I recall from the side of a stage a small Puerto Rican man in a wife beater flexing his muscles at me. Though I couldn't recall what he said, his face looked threatening. "Come on guys! ...give it up for this guys muscles."

The moment seemed oddly calming. "How'd you know my mantra?" I said to them continuing to smile. I remained calm as a scanned the room. I could see individual people laughing to dumb things I was saying to their incessant chant and if anything everyone looked like they were having a good time. I managed to squeeze one real bit through their stubborn faces before my time was up (oh I did my time) and then I got off the stage feeling no pain.

There's the saying that it's gonna get worse before it gets better. In order to be a good stand up comedian you've got to over come the bomb. When you're afraid of the silence it holds you back. Instead of the comedian you could be the fear replaces you with a shakier and inconsistent version of yourself. So if you're gonna bomb anyway you might as well embrace it. Soak it in and drown yourself in silence until you can breathe under water. Then you'll have a clear mind to know what's happening around you and swim towards the surface.