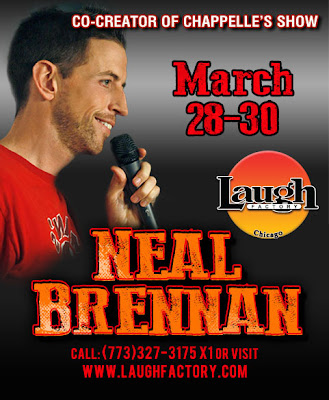 If your a comedy fan (even if your not), Neal Brennan is just one of those cats you should know. He's the co-creator for the game changing, record breaking Chappelle's Show (which was one of the biggest hits Comedy Central ever had), a writer, stand-up comedian, actor, director and producer with a prolific career most artists would kill for. He's written for the 83rd Academy Awards the White House Correspondents' Dinner and has more TV and movie credits then we can list here. Also if that's not enough, his podcast The Champs, that he co-hosts with Moshe Kasher, has hands down the best freaking guests period. (Chris Rock, David Alan Grier, Too Short, etc.)

Brennan will be at the Chicago Laugh Factory this weekend and was cool enough take some time out of  his busy schedule for a quick interview. To be honest Brennan had me laughing my ass off so hard, I accidentally switched off the recorder (had to use poorly scribbled notes, so it's a bit brief). Suffice to say it was a pleasure & I'm looking forward to the show.

Comedy of Chicago: Your originally from Pennsylvania but you also have some strong Chicago roots right?

Neal Brennan: Yeah I lived in Willmette for a few years and still have lots of relatives in the area, but as a kid I was coming down to Chicago for Bulls and cubs games like all the time. Had a relative who worked in the sports industry, so we would be hanging out at games whenever we could. I got to see Jordan play before anybody new who he was. People would see him out and think he was Orlando Woolridge (laughs), that was before Jordan became a Superstar. People just thought that any black NBA player they saw in Chicago was Orlando Woolridge.

COC: You work on TV shows, Hollywood movies and Internet podcasts, how important is it to keep doing stand up?

NB: It's the most important.  It's one of the rare creative outlets where I have total control. With writing or producing, it's always a committee on everything, your given notes on the littlest details. You really don't have final decisions on much. But with comedy I'm in total control, there is no one else to deal with. If the joke bombs it bombs, if it kills great, but It's all me.

COC: The Open Mic scene is very strong here in Chicago, it's where veterans go to get better, did you deal with that coming up? Our Open Mics part of you writing process?

NB: Not at first, I started stand up a little  late in my career, But now I hit them up all the time. I'll hit up 3-4 spots a night if possible. It's just the best way to work shit out. If I don't go out constantly I just feel weird. Some new comics will tell me they go out 3-4 times a week, and I'm like yeah you need to go up more.

COC:  How did you meet Moshe Kasher, and how did "The Champs" podcast come about?

NB: I met Moshe at the Comedy Store, and both of us have similar backgrounds and experiences dealing with black culture but it never made us act like "wiggers" you know? So we got together and just clicked, its just been a good chemistry.

COC: One of the features about your show, is that your guests are like 90% people of color right?

NB:  Yeah we were like “Let’s just have black dudes on the show.” Because really black guys are just funnier. I've had more great, funny conversations with a normal black person than a white stand up comedian. It's just never boring. There’s just more funny shit to talk about.

There you have it, Neal Brennan @ the Laugh Factory Chicago, March 28th - 30th.