The Exodus by Junior Stopka

It's time for another migration for our Chicago comedians. The pilgrimage for comedians moving from Chicago to another city for more opportunities happens every few years. And it confirms to me that Chicago has no industry and is just a giant stepping stone, albeit to me a golden one, for better things.

It breaks my heart to lose a brigade because they cannot make a living here. Chicago is the mecca of comedy. I don't even have to name names. New York and L.A. are full of our people. Those two cities have Chicago talent that's recast as New York or L.A. comics. You have to support the comedians because they worked their balls off to get that agent. Most agents or talent bookers won't even talk to comedians if they're not in those two cities. The move is a must. Combined with the reason that these cities have tradition, history, and those industries actually support and pay our fucking comedians. Sure, you have the people who only dream about being on a sketch TV show and use stand-up as a stepping stone. Or you'll have some people who just plan on just being famous with no talent. Then you have the truly talented comedians, who love stand-up, and realize it's just time for the move. They're ready.

Chicago will never get that reputation of being the great stand-up city that it is because we are considered an improv city where we like Da Bulls (for anyone who says this phrase, I hate them. Fuck SNL for writing that sketch), and eating a cake sized pizza that takes an hour to cook. Chicago isn't like that. For some reason, Chicago gets this ignorant reputation as a midwestern town full of blue collar coal miners that are living in the middle of nowhere by farms. Chicago has every bullshit thing the east coast and west coast has except we have alleys to dump our garbage in. We INVENTED skyscrapers that don't collapse. We have hipsters. We have assholes trying stand-up because they want to be actors. We have the highest murder rate in the country and we have plenty of bums. Plenty! We're scumbags. Probably the best in America. And so are our comedians. So it baffles me. Why isn't Chicago a stand-up industry filled city? Every time an outsider comes here, we'll equal what they got to offer or outshine them easily. It's because we don't have to impress anybody except our own grandiose egos. To call it a midwestern hick town is calling Chicago a shitty middle of the road sitcom, which I will gladly act in for drugs. 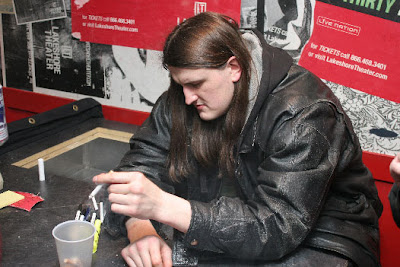 The redeeming factor that made many people stay this past couple of years was the Lakeshore Theater, now closed. This was THE best place to watch stand-up and, in the same regard, THE best place to perform stand-up in the country. Shit club acts couldn't get away with relationship bullshit or using a stolen Dave Attell persona doing derivative jokes. The audiences were comedy fans, not couples looking for a karaoke bar, but decided on comedy for the night. They wanted real original stand-up and weren't fooled by cliche recycled bullshit. The acts were big names. Performing alongside these big names raised the game of our performances. Eating tacos with Al Madrigal and talking shit about other comedians is one of my favorite memories. It is one of my favorite sit down shit talking conversations I've ever had. I still have fans every week or so walk up to me and remember seeing me at the Lakeshore. That's how big it was. I'm a nobody, but people knew who I am. Makes my heart smile. It was a real place, it was different, and supportive of our own original stand-ups. And comedians appreciated it because they started to get more work and more recognition through the media.

The same is true for media outlets, who move with the comedians for better things. It's just a necessity, and there's no way around it. You hit a wall. A new era has begun. It seems that some industry has gotten wind of us, and is now opening up a couple clubs around the city. Reputation spreads. Even the improv palace Second City has decided to throw their hat in the stand-up game. Classes start in the new Kyle Lease Loft. What I'm saying is I miss the broken toilet at the Lakeshore Theater and the filthy green room. That rock club atmosphere in a theater full of fans was amazing. The new venues are being built as I'm typing. It's scary because I equate sterility with handcuffing the comedians. Be clean, tight five, mention the nachos, wear a nice shirt because you're not funny unless it's Old Navy. Can't we just be the fuck ups everyone knows and loves? But I am happy to see all these new clubs and independent shows start to blossom. Maybe Chicago will get some industry yet.

There is a big problem. The big fuck up is Chicago as a whole. Every stand-up showcase says "the best stand-up comedians in the city". Then you go to a horrible produced show with comedians, who are obviously not the best stand-ups. The show doesn't have a stage, the room isn't made for stand-up, and the producers just look for a quick buck instead of building a crowd. Audiences get hoodwinked and probably won't go to another show ever again. The same is true for regular Chicago comedy fans. Being on television is a badge of honor, and I'm not talking about Letterman or Leno. Being on a soap opera or a really bad sitcom will fill any Chicago arena full of Naperville's tight assholed married people in a second. That doesn't make me feel good. If that's what the comedy fans support then I'm in dire straits. The same is true for any shit town in America, and also for the big cities. Normal working people get advice to see a comedy show by word of mouth and, usually, it isn't good. Then you have the great fans, who've seen great stand-up shows, and spread the word. It's amazing for those fans to see a great show nobody else knows about. It's like a cool secret for them. That's the word of mouth, but it gets a very small audience. 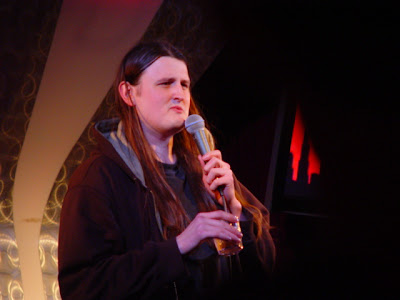 The move starts. My favorite people that move are the people who just move on a whim. It's also a move where an inexperienced stand-up with a dream gets their asses kicked performing in front of terrible rooms, trying to grind it out, and hoping for that King of Queens producer to check them out. There's so many comedians in New York. It's a hot bed of great comedians and bad comedians. It's the aura of being in the middle of greatness. Kind of like being the cameraman getting kicked in the balls by Dennis Rodman, while being in the presence of Jordan and Pippen. It's that swagger. You'll hear New York or L.A. is the best. In the same breath, you will hear the same cliche dick jokes there and all over these middle America cities. Just hoping for a spot on the now cancelled "Last Comic Standing". Getting in the awful reel where the producers try to humiliate you is still a credit. From what I've seen, being in that awful reel doesn't mean anything once your agent gets you booked on the show.

But the move is upon us in Chicago. Some comedians should move, but they're heart is still in Chicago. This is the place where they've found their voices. Every time they come back, they're home. It's addicting to be here. Just remember why they're gone Chicago. It's you, not them.
Newer Post Older Post Home