With No Responsibility Comes Great Power

There are a plethora of comics that I admire and consider big names in the Chicago comedy scene, yet my friends back in Wisconsin don’t know who the hell they are. (For a lot of comics I’ve seen, I put a big YET after the last sentence) But, again, that’s ok.


Being “unknown” gives a comedian a lot more power than we tend to realize. We all want to kill it every time we hit the stage and get a huge pop with each punch line we’ve written. When we don’t, we tend to botch the rest of our set or become disgruntled at the whole process of growing as a comedian. But we have to realize, we’re not expected to have a great night. At this point for most of us, the act of actually DOING comedy is what it’s all about.

Once we get our ass off the couch and onto a stage, we are granted the power to perform how we want. Nothing is expected of us at an open mic, so understanding the power of freedom is germane to ones enjoyment of the process of forming your own comedic persona. That’s what this power is all about: figuring out how you can be comfortable and feel free on stage. I used to stand on stage like a British Royal Guard, not look anyone in the eye, deliver my lines and then wait for laughter or crickets before going home to vomit. Then, one night I went to an open mic at the Globe and felt unnaturally comfortable. I not only ignored my notes, but did something that made me feel free, my first physical gag. I was telling stories to the crowd like I would to my friends and it felt natural. 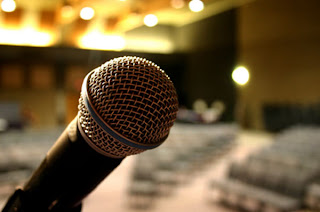 I got a good reaction that night, but that’s not why I felt good the next day, it was because I figured out that I had the power to try things on stage. No one expected me to do anything or do jokes in a specific style, so I didn’t try to. I tried different things out and, get this shit…I learned something about my comedic persona.