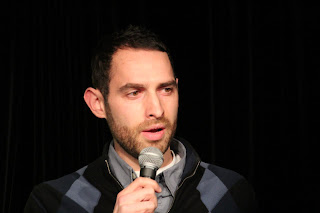 If you are interested in breaking into comedy, there are literally millions of podcasts you can listen to. If there is one thing that the podcasting boom has brought the world, it’s stories of bombing at Open Mics, getting discovered, and probably embarrassing yourself in front of Lorne Michaels. And if we have learned anything from these podcasts, it’s that there is no “right way” to break into comedy. While every comedian is quick to tell you their tips and tricks to making it, I’m a fan of Chicago comedian Aaron Weaver’s method. “I’ve winged it my whole life. I just sort of winged my way into this.”

I sat down with Weaver in the office above Laugh Factory Chicago just before he was to perform his last set in the city. In a week or so, Aaron is moving out to LA to further his career and I thought it would be appropriate to reflect on his time here in Chicago. 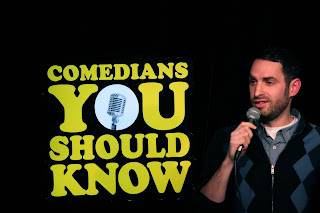 Aaron’s comedy, much like his career planning, is unconventional. I was hardly surprised when he said his comedy heroes were Mitch Hedburg and Steven Wright, their influences are clear in his act. But, he has evolved past one-liners and developed a stage persona that weaves absurd humor with expert storytelling. “What I write is pretty weird” he tells me as I ask about his writing process. He says it’s probably similar to any comic’s method, except when he’s riding the bus he thinks, “What if this chick was an animal”, instead of, “Oh my God, backpacks are funny.”

Winging it has gotten Aaron pretty far. He’s headlining all over the city, and is excited about his big move to LA. But his carefree attitude is starting to affect him. “The older you get, the more people try to force a plan on you, the more they judge you for not having one, and the more I start to believe them a little bit.” And the people may have a point. Aaron was just informed by his mechanic that the car he planned to drive to LA doesn’t stand a chance of making it there. But i’m sure he’ll figure something out. Automotive problems aside, Aaron has good instincts both on and off the stage. I think we can expect big things from him in LA.

So while this episode of my podcast might not be filled with a lot of “insider advice” or “tricks of the trade”, it does contain a smart, funny comic who is doing things his own way. Just don’t ask him what that “way” is, because he has no idea.

To listen to my full interview with Aaron Weaver, click on the podcast link below:

Above the Laughs: Comedy Conversations from the Laugh Factory Chicago
Winging It: Comedy Career Planning with Aaron Weaver