Jamie Masada is a name that holds a lot of weight in the comedy community. As a 16-year-old immigrant from Iran, he opened a club called Laugh Factory in Los Angeles. The year was 1979 and the comedy community was at a crisis. Comics felt they weren’t being paid fairly, and young Jamie stood up and started the first club that paid comics. He tells the story that when he tried to pay Richard Pryor, the first person on the infamous stage, Richard gave him a $100-dollar bill with a note that said, “you need this for your rent, boy". It’s now 34 years later and Masada hasn’t stopped supporting them. The Laugh Factory brand has grown tremendously, and last year he opened his fourth club in Chicago.

It is in that very club that I sat down with Jamie Masada to pick his brain on topics such as how to spot young talent, how the comedy scene has evolved over time, and the future of Laugh Factory. Few people treat comedy with as much reverence as Masada. Only a minute or so into our interview and Jamie is telling me how he believes comedians are the doctors of the soul. He sees his clubs as a place for people to go to forget about their problems; it is the comic’s job to make that happen. His system works like this: It is the comic’s responsibility to always take care of the audience, and in return it is the comedy club’s job to always take care of the comics. 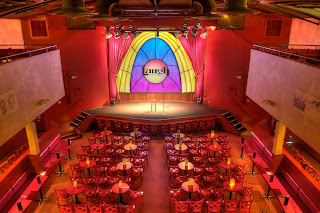 Jamie has always been adamant about protecting his comics. “The stage is like a church.” He says,
likening the freedom on his stages to that of a sanctuary. Jamie acknowledges that audiences have become more sensitive, but that doesn’t mean he stops defending comics. “You come to a comedy club and you have to take it. Lenny Bruce, Pryor, and Carlin all have paved the road for people to go on stage and say whatever they want".

He has made one exception. I asked Jamie about the night Michael Richards directed racial slurs at an audience member. His response: “I opened the club to bring joy to people. I have an obligation. I don’t promote negativity. I gave everyone in the club their money back.”

Jamie Masada has discovered countless of today’s hottest comedians, has given a stage to thousands of rising stars, has earned a reputation as a great philanthropist and has used his clubs to support a great number of charities. Jamie is not a mystical figurehead who is deciding the fate of our nation’s comics from a dark and smoky room. Jamie is a clear-headed, good-natured servant of comedy. Before he ended our interview, Jamie said he’d like to do it again some time. I don’t know if he meant it or was just being polite, but I’m going to try my hardest to take him up on it. Something tells me has a lot of stories.

To listen to the full interview, click the link to the Podcast below:
ABOVE THE LAUGHS: Comedy conversations at The Laugh Factory Chicago
Comedy King Maker - Comedy Wisdom with Laugh Factory Owner Jamie Masada