Review of Neal Brennan @ The Laugh Factory - By: Maya James

Let me be perfectly honest and clear, Friday night was my absolute ﬁrst time in a comedy club. So I was not completely sure what to expect. My mind initially went to all the negative things that could happen at a comedy show. What if the comedians are not funny? (That would be so awkward.) What if the crowd is rowdy? (I have a deep seeded fear of “mob action”.) What if I get heckled? Well luckily for me, my comedy club cherry got popped in the best way: quick, painless and at the world famous Laugh Factory.

Those looking for a different date night or girls night out experience, should give this club a try. The Laugh Factory provides a great ambiance for patrons. The staff is friendly and there is a full bar with drink specials. Plus, every seat allows a good view of the stage. After the show, make sure to have another drink in the lobby bar where comedians and audience members get to mingle.

This review is not only about my experience at the venue; but the focus is mainly centered on headlining comedian Neal Brennan. As the co-creator of and co-writer for the Chappell Show (one of my favorites) I was familiar with his previous work and expected good things. Stand-up is very different though. So here is my review in a nutshell: I liked him. His routine is funny. The fact that he referenced a presumed ﬁctional character Javaris Morris (the name alone had me cracking up in itʼs realness and ridiculousness), the ʻGood Timesʼ painting (if you have to ask, just disregard),
Fisher-Price and the Notorious B.I.G. all in the same set, sold me on anything else he had to say. His stand-up is relevant, it is current and it is relatable. 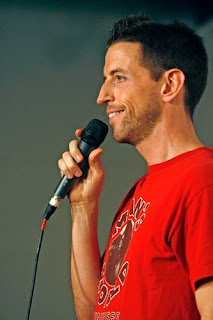 Allow me to to take a brief moment to describe how ʻfunnyʼ works for me. There are times when something is recognizable as ʻfunnyʼ, but it may not necessarily make me laugh. I respect and understand the joke, there just is no physical reaction outside of a smirk or smile. Then there is the ʻfunnyʼ that my body reacts to, despite myself. That is Brennanʼs ʻfunnyʼ. Although his early jokes did not initially invoke laughter from me, a slow simmer of giggles turned into a quiet rumbling of chuckles, which soon became full out laughing.

It was not just me either. The audience stayed with Brennan. They got him and howling from the back of the room ensued. When a Chris Tucker joke that seemed less like a joke and more like an actual recounted encounter had the audience scratching their heads, he addressed it head-on. Brennan agreed with the crowd, that he may have spent a little too much time devoted to Chris Tucker and immediately pivoted to another bit. For the record, that joke had me laughing the most. Overall, it was a solid performance that progressively built up to the end. He had all types in the audience laughing. They reacted well and timely. I am admittedly new to the ʻsceneʼ, but I assume that would be considered a good night. If you have not seen him live, I would recommend you do so the next time he is in town. All in all, I had a really good time.

Maya will be contributing reviews from time to time and is a prolific blogger in her own right.  Very happy to have her on the team. Check out her great stuff here http://mjmilkyway.blogspot.com/
Newer Post Older Post Home