Wow... watch the above video. Just do it. Best thing I've seen all week. If you haven't peeped this because of... I don't know, more important things going on in the world. I'll fill you in. A University of Maryland sorority member (Delta Gamma) sent what can only be described as the perfect storm of a bat shit crazy email to her sister members. Well that email has started to get parodied in viral video form. Michael Shannon (HBO's Boardwalk Empire, Hollywood etc) destroys in this, a brilliant & slightly psychopathic performance. I suggest you read the email first, then watch the video. 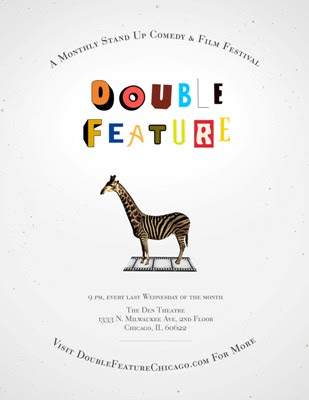 On a side note (lengthy transition to a comedy plug coming up) some might be asking, "yeah that's great, but what does this have to do with the Chicago comedy scene?" Everything. It has everything to do with it. Stick with me here... At root, what is a viral video? A short film, right? And most comics are at heart, what? Writers. Beyond that, most live performance types are also, in general, multi-tasking art monsters. Creative jacks of all trades, if you will. Comedians are no exception to this. What I'm saying is Chicago has no shortage of short films being written, produced and staring comedians and/or improv actors.

With that in mind you should go check out out Double Feature (yeah I know, that was a long fucking round-about way to plug a show) which is something a bit different because it's a unique new monthly comedy showcase + film-screening event. DF takes place the final Wednesday of each month at The Den Theatre in Wicker Park starting April 24th (This Wednesday). The concept is that stand-ups will share stage time with short comedy films. The show is produced Ian Abramson, Tim Barnes, Melody Kamali, and Marlena Rodriguez and has gotten a ton of buzz and local press recently.