Review of Nick Thune @ The Up Comedy Club - By: Maya James

I got a chance to see Nick Thune perform Saturday night at the UP Comedy Club, located on the 3rd Floor of Piper’s Alley, above Second City. The venue was terrific and there are plenty of drink and food choices. Upon entering, you are immediately hit with an assortment of delicious food smells. I even saw some cheesecake float past my table a couple of times, so definitely bring your appetite.

I found the lineup to be just as eclectic. Ever Mainard, the night’s MC, and Dan Ronan, the opening act, were just the kind of quirky lead-ins needed for a Nick Thune performance. Whomever put these three together, whether on purpose, or sheer coincidence, was on point. The entire night was in synch, each performer building for the next comic. 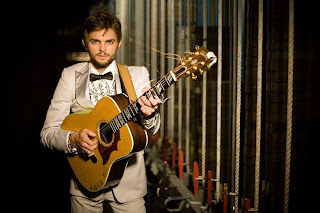 Prior to this show, I had never before heard of Nick Thune. A girlfriend looked him up and described his act as comprising of a dry jokes and a guitar. So initially, I was not really in the mood. But, what she did not say and what you cannot tell by his promotional pictures is: A) How much he looks like Ashton Kutcher! Ok, so I did not have my glasses on which are specifically for sharpening my sight for long distance objects and night vision. Regardless, my girl even agreed. B) How funny he is!

Thune’s comedy is indeed dry and matter-of-fact, but in a very good way. Having recently broken his arm, he was unable to strum his own guitar (that doesn’t sound right), so he hired a 18-year-old teenager to perform the duties (that sounds even worse). The teenager, whose name was either Jonah or Jacob, I cannot remember, managed to keep a straight face while accompanying Thune on stage. Not an easy task, even for an unfazed teen.

Whether explaining how exactly he broke his arm, a gruesome story, or how he sometimes refers to his wife as his roommate “especially when introducing her to other women”- hilarious, he kept the audience’s attention throughout his entire set. Nick Thune is definitely a comedian to watch, with or without the guitar.