Well it looks like were just going to have to resign ourselves to blasting out the "what's popping" segments about once a week since there are just so many excellent comedy events going on in the Chicago scene right now.

For those of you who are budget conscious but still looking to enjoy some quality comedy, you should know that many of the shows listed here are free or almost free and have great specials happening on any given night.

Thursday nights alone are ridiculously  stacked with like a bazillion showcases and open mic offerings. We try our best to give out all the relevant info for each show. There are addresses listed for some, lineups for others and links to all. Without further ado, check out what's popping...


LAUGHING INSANITY
At the Laugh Factory Chicago
Jay Washington, host of the Radio Show “Educated Insanity” brings a hilarious ensemble for the debut of “Laughing Insanity”. Comedians from in and around the Chicagoland area take to the Laugh Factory stage delivering laughs to the audience and worldwide as the show is broadcast LIVE on www.chicagolandsportsradio.com and www.windycityunderground.com
Featuring:
Kellye Howard
Marc Henderson
Ken Garr
Anthony Bozanno
Schmitty B
Kevin Williams
Xavier Lamont
3175 N Broadway St, Chicago, IL 60657
TONIGHT! (April 25th, 2013)

Stand Up Stand Up Presents Mike Lebovitz
At the The Crocodile Lounge
Recomended!
Tonight! 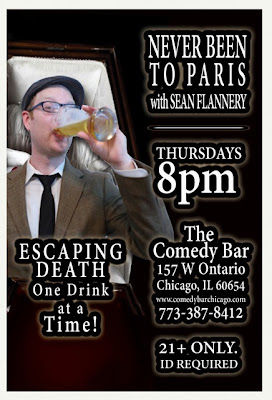 NEVER BEEN TO PARIS
The Comedy Bar- Chicago

I SHIT YOU NOT!
Warning: Although this showcase  is hilarious... it's also slightly disgusting since all the stories are related to bodily waste in some form.
Line Up:
Derek Smith,
Maggie Jenkins,
Ever Maynard,
Tanya Freseth,
Justin Kline (from the Movie "Virginity Hit"
Prescott Tolk (writer for "Real Househusbands of Hollywood" TV show)
Hosted (as always) by Monte LaMonte & Michael Sanchez.
At the Township
2202 N. CALIFORNIA, Chicago
Tonight!


Mike Lebovitz @ THE COMEDY BAR
The Comedy Bar- Chicago
All weekend long.  (Fri & Sat)
Catch this fat hilarious bastard before he makes it big and moves to hollywood.
Recommended!

Dov Davidoff @ Zanies!
Dov Davidoff has more TV and comedy credits than you can shake a stick at.  A special & rare appearance at a intimate venue. Recomended!