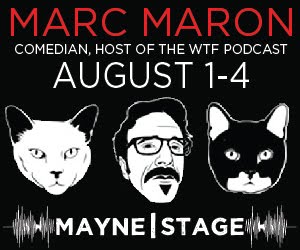 (The following two paragraphs are just an intro of a great article from splitsider.com, just in time for all you podcast nerds out there)

TV is Dead, Long Live TV. While television is rapidly decaying on the business end of things, simultaneously it is consistently evolving, more artistically challenging and even auteur-friendly, and that is partially thanks to the infiltration of comedy podcasts. Some shows try to incorporate some of the DNA of their pods to the small screen, like Comedy Bang Bang and The Nerdist, while standups like Nikki Glaser, Sara Schaefer, and Pete Holmes have parlayed their numerous hours behind podcast mics into late night hosting gigs. Maron, premiering tomorrow, would never have become a reality if it weren't for his years hosting WTF with Marc Maron, the popular interview podcast that has been well documented to have saved both Maron's career and his life.

Of course, it's dismissive and myopic, albeit technically accurate, to simply think of podcasts as the minor leagues of television. Podcasts will always have an intimacy and earnestness that can never fully translate in any other medium, and the free reign enjoyed by comedians could never be duplicated by even the most "Louie deal" of Louie deals. But despite the state that it's in, the appeal to being on television will never go away, kind of like a song will always sound better on the radio than on an iPod. It is more than understandable: there's the prestige, the literally million or more people who know your name, the money to afford full meals, etc.

That is to say that all that is being said is: in honor of Marc Maron's TV show, here are ten podcasts that would be great on television.