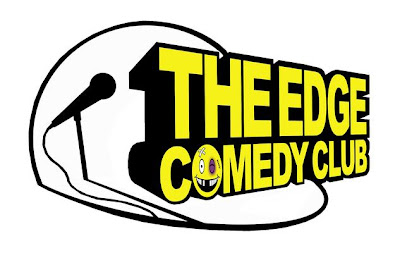 Dang... Just found out the The Edge Comedy Club Open Mic is CLOSING. Wow, that's a little sad... The Edge was one of the first rooms I ever checked out almost 5 years ago. Used to be run by Dave Odd and was located at the Chicago Center for The Perfroming Arts but got booted out of there when the venue had to close. Then it moved to Sully's House bar & grill and is currently run by Kyle Scanlan who confirmed that Thursday is the last night. There are no plans to move it to another location under that brand as far as we could gather. Again kind of bitter sweet since The Edge was probably the longest running brand for Open Mics in the Chicago comedy scene. It's not an exaggeration to say every comedian worth some salt has played this room in some form or another, and I mean everybody. From Hannibal Buress to Kyle Kinane to Junior Stopka. It's a shame... but hey that's the nature of the comedy beast. Guess the bar owners think karaoke night or whatever is going to go over big. We encourage everyone, both comics and fans, to come out this Thursday and help put the old girl down.

After you dry your eyes check out what's popping this week and beyond. 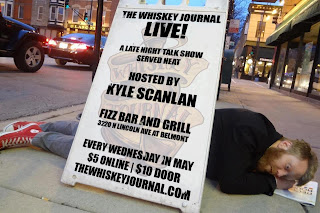 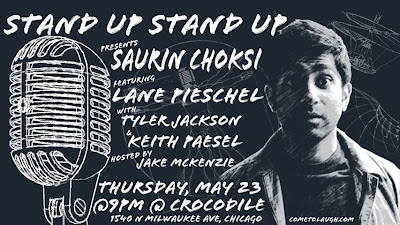 CLOSING NIGHT! The Edge Comedy Club's Big Fancy Open Mic
@ Sully's House
1501 N. Dayton, Chicago, IL.
FINAL NIGHT EVER
Say it AINT so. Yep. One of the best Open and longest running Open Mic's in Chicago will be no more after Thursday. We strongly suggest that everybody gets there and goes ape shit... or sits and laughs at comedy... whatever.
Thursday, May 23

Stand Up Stand Up Presents: Saurin Choksi
At The Crocodile
TYLER JACKSON
KEITH PAESEL
JAKE MCKENZIE
LANE PIESCHEL
SAURIN CHOKSI - Headliner
Tight line up with a great headliner - plus Lane Pieschel is leaving town and this show is one of your last chances to catch him perform before he leaves.
Duck Duck Comedy
At Goose Island Wrigleyville
Jeff Arcuri - Host


The Mic With No Name AKA Hidden Shamrock Open Mic

The Nasty Show
This Saturday at the laugh Factory
Solid local lineup!

@ The ComedySportz Theatre
Some of the best comedians in chicago pass through here every week.
A proper thaeater with great lights and sound.
Every Monday

Hoo Ha Comedy
Brand new, all female, comedy collective based out of Chicago. We produce a showcase
Every Tuesday @ Beer on Clark.
$5 and NO DRINK MIN!!
7:30PM, 3415 N. Clark, Chicago, IL
Every Tuesday

The Sklar Brothers @ The Up Comedy Club
OK, it might be almost two weeks away but all shows for this event may sell out quickly, just wanted to put it on the radar.
May 31 - June 1