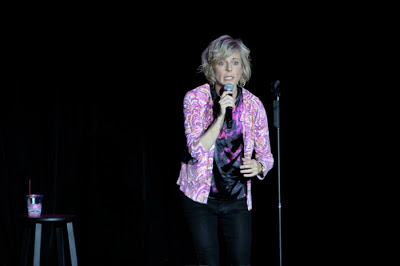 Maria Bamford is Probably a Living Legend. There, I said it. And I stand by it. I’m willing to wager that Maria Bamford will go down as a legendary comedian in the years to come. Maria is a lot of things: brutally honest, wholly original, off-putting to many, and super super crazy. She’s also a comedic genius who is very important to standup comedy, but more on that later.

I saw her a few days ago when she swung in for the JFL Festival. I was pumped, she was already one of my favorite comics working today. Well before I started doing standup, I saw her half hour special on Comedy Central. When it was over, I thought “wha…what the fuck was that”. Definitely something new and different. I caught blurbs of her here and there over time, the occasional drop in at Conan or the Comedians of Comedy DVD (notable quote: “I wish my hands were SUC-TION CUPS!”). Each time was a revelation into weird and uncharted waters, with a delivery you’d never quite heard before. I’m still not 100% sure what her offstage voice sounds like.

I get to Park West, the venue she’s performing at, and snag a nice seat. I must say it’s a pretty snazzy joint. Great acoustics, great layout with a bit of a chic club-y vibe minus the doucheyness. Cameron Esposito opened the show and killed it with her polished and approachable brand of humor. Once the audience was warmed up, Bamford hit the stage. She immediately laid down on her stomach to shake audience members’ hands, then started rolling around, shaking more hands as she rolled along. Hilarious.

That set the tone for the rest of the night: weird, fearless and hilarious in such unexpected ways. She does an impression of the Schizophrenic Squid. Talks about how a Paula Dean recipe sound like suicide note (“eggs, butter, bacon…don’t try to stop me I intend to go through with it!”). How there is a “genocide” on fast food (“first when they came for the cheeseburgers I didn’t say anything, because I wasn’t a cheeseburger”). 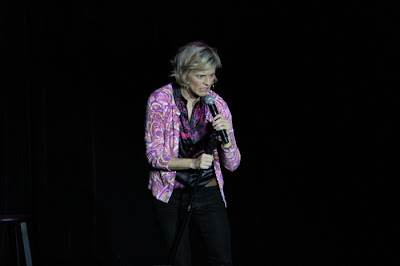 She also, surprisingly, speaks extensively about her various mental illnesses, which are quite a few. Bamford actually devotes a chunk of her set to solely discuss theses battles with mental illness; it’s a subject that comes up much more frequently in her sets these days. And this is why I think she is important to stand-up comedy: she is a national headliner and a late night talk show regular who is willing to tell jokes about her mental battles. This is practically unheard of in mainstream entertainment. Bamford is the only comedian, I can think of, who currently does this.

Being an funny comic is one thing. Being a comic who makes it OK for comedians to be honest and embrace their mental struggles is a feat all of it's own. To not just mention it and then quickly change the subject, but to tackle it full on and wring every ounce of truth and humor out of it. Fear not, for the Bammer has spoken, and yet another taboo can be looked upon and joyfully laughed at.