pHeel The Love @ The pH Theater - By Michael Shapiro 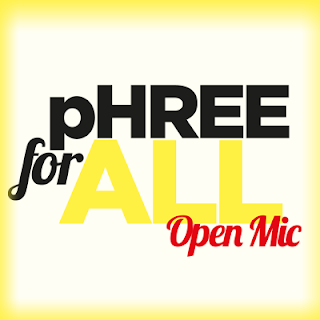 It seems like more and more traditionally improv based theater venues are trying to get in on the standup comedy action. Second City has made itself a big player for showcasing big names, Chicago and nationwide. iO, Comedy Sportz and The Playground have also gotten in on the action in recent years. Even places as eclectic as record stores, book stores and sex toy shops have been putting on some really great shows.

As someone who has just begun explore the scene and all the shows in Chicago, you can feel the excitement. The energy is infectious, it keeps you up at night. pH Theater, a relatively new venue for improv and sketch, has recently been putting on a standup show and open mic every week. I became exposed to the open mic early last year, not long after it had become a regular Wednesday night thing. Located in Andersonville on Berwyn and Clark, you immediately feel welcome in this cozy neighborhood. Soothing Irish folk tunes, performed by a live band from the bar next door, waft through the air and down the sidewalk. The relaxed vibe continues into the theater, where everyone casually drinks and socializes while they wait for the show to start. It’s BYOB, which is great if you’re broke. I know you all are, and I certainly am.

Everyone’s had a few drinks, and before you know it the mic has begun. The real success relies on  Eric Oren and Kenny Metroff. They both helm the show with a kind of controlled chaos: loose, crazy but still manageable. Admittedly one drawback of the mic is the first 25 who sign up get 4 minutes, anyone left gets less time and may not go up at all. When the signup list comes out, it becomes a feeding frenzy of elbows and pens as everyone tries to get a decent spot on the list. Just make sure you get there at least a half hour before the list comes out for a guaranteed 4 minutes.

Loose and fun atmosphere + BYOB = most of the comics killing it. Not only does almost everyone have a good set but, after your set, you want to stick around for everyone else’s set too. You’re not tired, you’re having fun. I’m no expert but that’s got to be a formula for a good open mic. When the show ends everyone spills out onto the sidewalk, maybe off to a bar or to a restaurant with friends.

I attended the showcase, which is held almost every Friday night, on May 31st. It was a good mix of young up ‘n’ comers (19 year old A.J. Lubecker) with seasoned Chicago luminaries (Brian Babylon). All the comics did well before a sold out house and Brian killed it like always. Once again, it’s BYOB and once again it is helmed by either Eric Oren or Kenny Metroff. It isn’t as loose as the open mic, nor should it be, because it’s a professional showcase. When the show is over, you have that same jovial feeling you get after the open mic, and it ends early enough that you can enjoy the rest of your Friday night.

What else is there to say? pH has a great open mic and a great show. It’s in a great area. It’s run by cool dudes. Did I mention it’s BYOB? Go check it out.