The End of Two Black Dudes...

After tonight, the monthly open mic/showcase "Two black dudes and an open microphone" will be no more.  For comedy nerds of the Chicago scene, this news might come as a slight shock. Alas, it's sad but true. 2BD has been a staple of the north-side for about 5 years and it's no exaggeration to claim that just about anyone who was anyone in the Chicago comedy scene performed a set here at one time or another.

Comedians like Hannibal Buress, TJ Miller, Lil Rel, Beth Stelling, Neal Brennan, Eric Andre, Nick Vatterott, Junior Stopka and a plethora of many other comics too numerous to mention, have all graced the stage at some point. Well "stage" might be a bit generous... you see 2BD takes place at the iconic Town Hall Pub, a straight (ish) bar smack dab in the middle of the very gay "Boystown" neighborhood. And if you know any thing about Town Hall Pub you know it's pretty much the mother of all dive bars in Chicago. So the fact the show did a 5 year stint, much less got the caliber of talent that it did, is as much a testament to the popularity of this mic/showcase as it is of the work ethic of the two guys that ran it, Clark Jones and Will Miles. 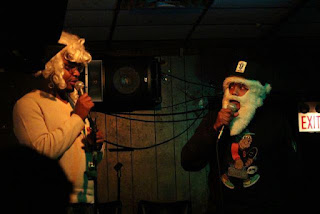 Clark and Will are two of the most prolific working comics in the Chicago scene: showcases galore, festivals, features, headlining appearances and numerous sets on both the north AND south sides of Chicago. Why does that matter? Because although Chicago is a great town, it's also segregated as fuck, which unfortunately seeps into the comedy scene. But Clark and Will never let that stop them from building a skill set and brand that transcended racial barriers which has also served as a blueprint for many new to the Chicago comedy scene. Not to mention their chemistry onstage is kind of scary good. Stand up comedy duos are hard to find, and even harder to pull off but Will and Clark make it look easy.

When emailed for a quote relating to the end of of 2BD, Clark responded "Without 2 Black dudes I wouldn't be the comic I am today so...blame the show." And Will responded "We just want to leave Chicago letting everyone know any comedian can perform anywhere. The only thing holding back a comedian is himself."

The only thing that matches Clark and Will's work ethic is how freaking nice these two dudes are.  Not being an asshole goes a long way in this game (don't knock it). They always seem to have time for quick chat, a joke, or some advice for a new comic. Enough said. Get out tonight and support if you can.