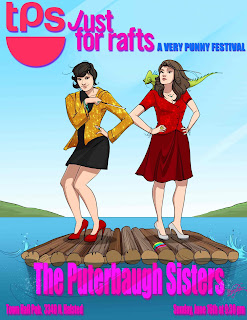 Yo! Lots of Chicago comedy news happening this week. Not only are big name celebrities popping up all over town because JFL is in full swing (also NHL finals!), but there are a ton of non-festival options going on concurrently as well for you "alt fans" out there craving something different .

Case in point, Zanies is producing a "10 Comedians For Ten Dollars" showcase happening all week long through Sunday. The Laugh Factory has a week of FREE "Chicago Showcase" shows ($10 suggested donation at the door to the Red Cross) lined up and the Puterbaugh Sisterz are producing the parody festival "Just For Rafts" which is happening this Sunday & features a stacked lineup.

Check out what else is Popping in the Chicago comedy scene (including stand out JFL Shows) this week and beyond.

Just For Laugh Presents: Seth Meyers with Special Guests Al Madrigal & Hannibal Buress
OK, yes, this show is just in a few hours and yes it's going to be packed, but tickets might still be available so do it if you can...
Highly recommended!!
@ The Chicago Theater, June 14, 7:30PM

Think Tank presents: Chasing the Hype
Think Tank returns to the stage with a new dose of its trademark style of silly satire and bizarre scenarios. "Chasing the Hype" uses elements of vaudeville, silent film, and multimedia
Sundays at 7:30pm June 2nd - 23rd

@ The ComedySportz Theatre
Some of the best comedians in Chicago pass through here every week.
A proper theater venu with great sound, lights and top notch crew.
Every Monday