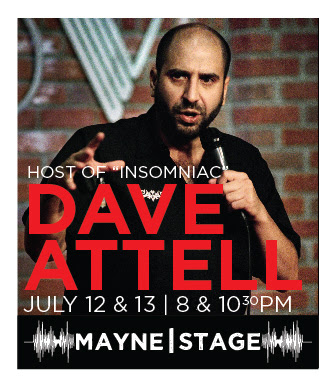 Yo! Some big comedy shows are happening this weekend that we want to put on everybody's radar. The biggest of which is that Dave Attell is headlining at the Mayne Stage this Friday and Saturday. This show will also feature local heavy weight Danny Kallas, co-producer of Comedians You Should Know (one of Chicago's best local showcases), which is a brilliant piece of booking and I couldn't think of a better Chicago comic to match up with Attell's style.  This is a going to be a serious bananas type show people. If your a true fan of comedy you should really do your best to get there.

If your not familiar with Attell let me break down why he's one of the best (but if your a comic you should really do your freaking home work). Born and raised in New York, Attell got into stand-up comedy in the late eighties, worked his way up through the club scene touring across America and developing a huge following. In 2001, Attell used his love of booze and comedy to create and host "Insomniac with Dave Attell" for Comedy Central. After four seasons of “Insomniac,” Attell headed out on a thirty-five city theatre tour ending in Vegas, where he hosted a two-hour special for Comedy Central.