Stand up and Improv: Can’t We All Just Get Along?

Ah... Improvers and Standup comics, Chicago’s biggest rivalry?? But why? Aren’t we all just comedians? Well, I guess that’s like saying aren’t the Sox and the Cubs are all just baseball players (which, by the way, they aren’t. The Sox are players. I think the Cubs are a lost group of janitors or something).


The point is these two groups have a lot in common. The most important thing they have in common, other than divorced parents and a rough time in junior high, is that a lot of them participate in both of these pastimes. So, why all the hate? Is it because improvisers don’t have to write jokes and can spend 40 minutes making an audience uncomfortable and then consider the show a success because they had “grounded characters?” Or is it because stand-ups can write 7 minutes of material, perfect their best Dave Attell impression and coast for 3 years?

Stopping fighting guys! You are all amazing, special, and very talented. And you are all very poor. Isn’t that enough? Isn’t it enough that you live in an amazing city that not only has the capacity but also the love to house these two amazing comedic art forms? 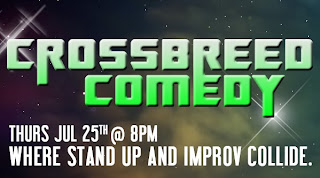 Isn’t it enough that when you step on stage at Laugh Factory or iO or Zanies or Second City that you are standing in the footsteps of greatness? Isn’t it enough that whether you are on a Harold Team or in a comedian-produced showcase, your extended family still wants to know when you’re going to “shave that ridiculous mustache and get a real job?” 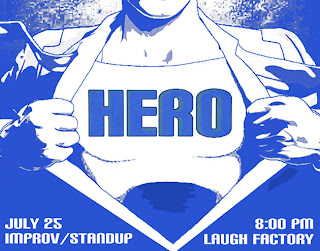 You guys should be friends. You’re the same people. You have the same story. Granted, one of you spent way too much money on “classes.” But, you all want the same thing. You want to bring joy to strangers. And you want to mock those strangers for not really “getting you.”

It’s in the spirit of that camaraderie that I wanted to put “Crossbreed Comedy” on everybody's radar. The show will feature a great host (Martin Morrow) and 3 amazing Chicago comics (Michael Larimer, Liza Treyger, and Saurin Choksi) performing their best material. Then, after each comic, the fantastic improv troupe (HERO) will come out and perform some long form improv based on the comic that just performed. At the end of the show, all the comics and improvisers will come together on stage to play a game. I know this isn’t a completely revolutionary idea. But unlike iO’s Armando or UCB’s ASSSSCAT, this isn’t just an improv show. And it’s not just a standup show. It’s both.

They have equal time and equal billing. There’s no winner and nobody gets eliminated. It’s just a comedy show in its purest form. So whether you’re the type of person that sits in a coffee shop and tries to write jokes about anything other than coffee shops, or the type of person who practices object work when you’re naked in the bathroom, this might be show for you. Watch the the Chicago comedy community come together this Thursday at 8pm. And fuck the Cubs!