“There’s truth in comedy.” “Just go up there and be yourself.” “Use your own life experiences.” These are three of the standard answers to the generic question of the best path to excel at stand-up. They are great answers, and they are correct. But, I want to talk about the comedians who go against those tried-and-true cornerstones of comedy. I want to talk about the people that look truth, self-discovery and vulnerability in the face and say, “Fuck it. I’m doing a character.”

Comedians doing characters on stage is nothing new. It’s been happening since the beginning. And despite all the talk of honesty and purity on stage, every comedian is doing a bit of a character. Even Richard Pryor is playing “Richard Pryor the comedian” on stage. Than being said, there are a select few comedians who have mastered the art of being someone else. So I give you, in my humble opinion, and in no particular order, the top five comedian characters.

George Carlin - Al Sleet, The Hippy Dippy Weatherman
Carlin is known for his no nonsense, satirical, sometimes dark humor. So there’s something refreshing about seeing him slip into this goofy stoner character. Al Sleet, who would say things like, “The weather is dominated by a large Canadian low, which is not to be confused with a Mexican high.” was pretty edgy for the sixties. While Carlin will probably never be considered a character comedian, his comedic range is just further that he truly was one of the greatest to ever take the stage.

Craig Shoemaker - The Lovemaster
Of all the characters that come out a comedian’s act, I have to say this one caught me the most off guard the most. Craig Shoemaker is an all American comedian. He’s excitable, he’s fairly clean, and of course he’s very funny. But then there’s his alter ego, The Lovemaster. He’s a baritone-voiced sex hound that will never let an innuendo slip by. I think, like Carlin, it’s the dichotomy of his regular stage presence and his off-the-walls character that makes him great. Craig just performed at the Laugh Factory Chicago this last week and is sure to return. If The Lovemaster comes out, you can expect to hear things like, “Oh yeah baby. I got four inches. But, some women don’t like it that wide.”

Maria Bamford - Her Mom
Now I realize a lot of comedians do impressions of their mothers, but none do it quite as well as Maria Bamford. It truly is an amazing performance. Aside from her impressive voice and mannerisms, Maria seems to channel this “character” on a deeper level. The act became so popular, it is now a webseries called Ask My Mom. On stage, Maria seems anxious, and uneasy. When she becomes her mother, who is quite the opposite, you can get a little glimpse into what make Maria the genius she is today. 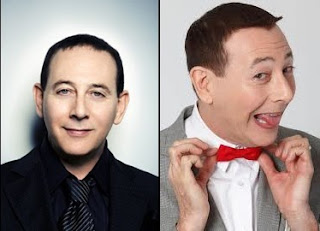 Paul Reubens-Pee Wee Herman
No one has turned an onstage character into more of a phenomenon than Paul Reubens. Pee Wee Herman is a comedy character legacy. From HBO specials to TV shows to major motion pictures, Pee Wee has become an American icon. After 30 years in the spotlight, (minus that little hiatus where Reubans played a character who masturbates in movie theaters) he’s still making audiences of all ages all around the country laugh their asses off. Paul Reubans has created one of the most important comedy characters of all time…times infinity. 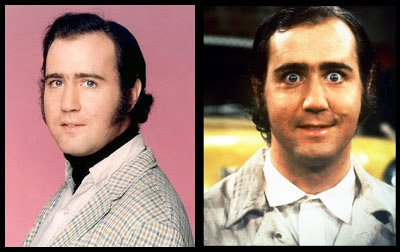 Andy Kaufman – Andy Kaufman
Andy Kaufman’s life is one of the greatest pieces of performance art that has ever been performed. His career is to be studied and analyzed and enjoyed. And it’s certainly not to be summed up in a short paragraph in a comedy blog. Finding the line between the character of Kaufman and the real guy is probably next to impossible. And to make things even more confusing, he also did real characters on stage. Whether he was Foreign Man performing the Mighty Mouse theme song, Tony Clifton yelling at the audience, or just Andy being Andy, his characters were light years ahead of their time. And if you don’t believe me, Tony Clifton is still performing thirty years after Andy’s death. No one will probably ever fully understand the genius of Kaufman, but through his act, we can see how a fictional character can really personify truth in comedy.