Yo! It's time for the Weekly Top 5... Ok, so clearly, this particular segment has not been weekly and as for "Top 5", well sure, some folks are going to disagree. This list is subjective, based on opinions, and only covers events we actually went to. So of course we missed some shit... But feel free to send us links of your favorite events/venues/shows and we will put it on the radar. Without further ado here are the 5 best things that happened last week.

Monday Night @ Comedy Sportz: The prolific Jamie Campbell and his crew has definitely got a lock on Monday nights. Not only do they produce the 100 Proof Comedy Showcase, which is one of the best run showcases in Chicago. They also throw The Chaser, (a fantastic open mic) which immediately follows. The comedy festival sensation Stewart Huff just headlined there last night. The venue is top notch, the line up is solid and the headliners remarkable.


Three Dead Moose Open Mic: Jesus Christ this is a fun mic.  I know it sounds corny but it kind of feels like family every time. It actually feels like what you think Cheers felt like for Sam... Except you all get to be Sam!  But seriously it's one of the best run Open Mic rooms in Chicago, well lit with great sound. Reena Calm and David Drake (and guest hosts like Saurin Chsoki) go out of their way to make people feel welcome. Sure it gets crowded, and you might have to wait a bit but its well worth it. Oh yeah, every comic that goes up gets a free mystery shot (some times nasty sometimes delicious), so yeah.

Michael Joyce's final night at the Rathskellar Open Mic @ Lotties: This is one of the more popular open mics in town and a big reason for that was Michael Joyce. Well, unfortunately Joyce has moved on (not dead just left for NY). The "going away" party was last week and it was crazy. Straight bananas. A real who's who of the comedy scene came out to pay respects.  Megan Gailey will try to keep the magic alive stating tonight. Sign up list @ 7:30.
$4 jamo shots,  $2.50 Steinlagers & $4 Burgers!
1925 W. Cortland
Chicago, Illinois 60622 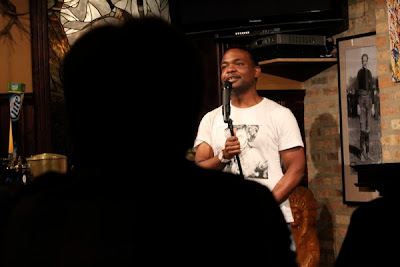 Clark Jones Set: Caught Clark Jones sunday night as he tightened up for some headliner and hosting gigs he has this week. Jones was as loose and comfortable as ever. Clark if you don't know is one of the top working comics in the Chicago comedy scene and is moving to NY in a few weeks. Catch him in town while you still can. 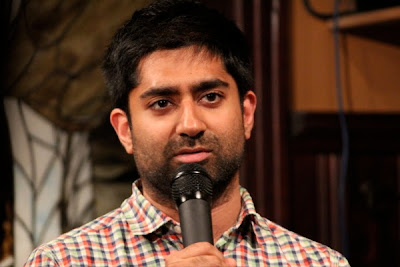 Saurin Choksi hosting his ass off all over town: Kept catching this guy either hosting, or co-hosting all over the freaking place last week. Always brings the energy, always brings his "A" game. One to watch for sure.