Gradually, Stewart Huff is generating a buzz that’s becoming harder to shout over. Born and raised in Kentucky with the drawl to prove it, he’s gaining traction as a comic’s comic, a man who isn’t afraid to take risks for the sake of enlightening his audience.

His new album, I Don’t Think I Believe Us, is a fitting portrait of his work. This album doesn’t go for easy laughs or one-liners. There are entire tracks on this album where the audience doesn’t laugh a single time. However, they’re still fully engaged as Huff muses on topics such as truck stops, abortion, and the pornographic value of National Geographic. He focuses on deconstructing the world that the audience arrived from, pulling everything apart and helping them examine it before sending them back out again, hopefully as more critical-thinking and compassionate people. 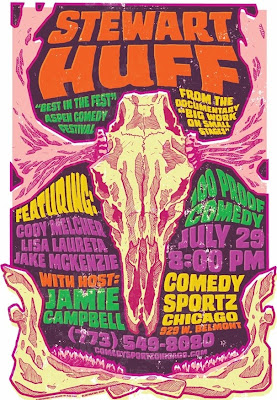 I had the opportunity to open for Huff for a weekend last year in the city where I came from, which was a privilege I had absolutely no business receiving. Before that weekend, I had no idea who he was. Being a house comic, I was already developing a pretty good ego with a generous side of detached cynicism. So I did my 8 minutes of my trying-so-hard-to-be-campy one-liners, then ceded the stage to Huff. The next hour of material, most of which appears on this album, absolutely blew my fucking mind.

Not only was it smart and witty, but it wasn’t masturbatory in any way. Stewart Huff isn’t up there for himself so much as he’s trying to promote a dialogue between himself and the audience. He wants to lead you toward an epiphany, not forcing anything down your throat but making a logically sound case to become a better, less judgmental person. You WANT to be better after listening to Stewart Huff. That’s his magic.

Toward the end of his set, as I was sitting at the bar with my stool turned fully toward the stage and my back at the bar T.V., I heard the club owner mutter, “I wish he wouldn’t be so preachy.” I imagine it’s something Huff has to deal with a lot, especially as a southern comic performing in the midst of the “blue collar” movement, and he tells some anecdotes on the album to that effect.

His enthusiasm for people hasn’t seemed to dwindle in the slightest, though. After his closer, which doesn’t try to end on a big laugh but on a big idea, the album ends with 30 seconds of club ambiance. For the most part, it’s just people in the room talking. It may seem like a strange way to end the album, but it makes perfect sense for Stewart Huff. It’s people having a dialogue. That’s all he’s striving for in the end.

Stewart Huff has been performing all over Chicago this week, with outstanding shows at venues like 100 Proof Comedy and Stand Up Stand Up. You can get his outstanding album on iTunes now
Newer Post Older Post Home