Once again it's time for the Weekly Top 5. As stated in previous segments this list is subjective, based on opinions, and only covers events we actually went to. So of course we missed some shit... But, feel free to send us links to your favorite events. Without further ado here are the 5 best things that happened last week.

Miller Lite Stand Up Comedy Competition Featuring Marlon Wayans: Had the opportunity to meet & interview the brilliantly hilarious Marlon Wayans on Sunday night at the swanky Park West. Wayans served as special guest judge (check out the pics) for this national comedy search. Four local comedians competed for a chance at the finale event in Atlanta, where one stand-up comic will win $10,000. Not too shabby. The show was packed, the comics rocked it, and host Leon Rogers completely destroyed, but Wayans really was the highlight. At one point he had his fellow judges in stitches the show had to actually stop while every one composed themselves. Interview will be up in a few days.

Kellye Howard winning the Miller Lite Stand Up Comedy Competition: Howard rocked it hard at this at this contest and gets to go to Atlanta to compete for $10,000, (not too shabby). Howard takes real life stories and spins it into comedy gold like no other. Her comedy is unexpected and comes mainly from real life experiences finding the funny in everything, regardless of how painful it may have been  at the time.

The Hoo Haa Comedy Showcase: Check out a great showcase here last tuesday. This all female Comedy showcase collective has been putting together some of the best lines ups in Chicago (male & female) right smack dab in the middle of the Wrigleyville at BEER on Clark. FREE & great drink specials. Doors at 8pm, Every Tuesday. Come see acts from the top Comedy clubs. NO DRINK MIN. 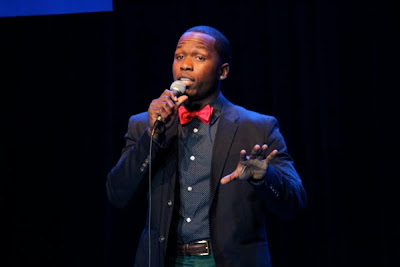 Calvin Evans: This guy has been killing it all over Chicago and was an extremely close second place at the Miller Comedy contest. Evans' impersonations and comedic antics put the house in an uproar and was arguably the crowd favorite.  A up and comer for real.

Four Trey Open Mic: Had a blast at this mic last Tuesday. A real who's who of local comedians came out to perform and just have general good time. Great drink specials and fun atmosphere. Sure there's a pool table right in front of the stage and yeah there were a couple of old school drunks posted at the bar,  but that just adds to the charm, gotta say it was one of the funnest mic's I've been to. Recommended.
Sign up 9:30 PM, Show starts 10PM
3333 N. Damen Ave,
773-594-8845