This list is subjective, based on opinions, and only covers events we actually went to. So of course we missed some sh*t... Here are the 5 best things that happened last week.

Open Mic Night at Jokes and Notes: Every Wednesday this south-side club (46th & King) throws what is without question the best Open Mic in Chicago. Here are some reasons why...

1. Has real audiences. Went to J&N last Wednesday and the place was packed. Patrons pay hard earned money (plus two drink minimums) to see a quality show, as opposed to most Open Mics (90%), which have no real crowd to speak of - just other comics waiting to go up.

2. It's a proper club/theater. J&N is a professional dedicated club, not just a bar with a mic in the back room. Professional lights, sound and a skilled DJ who's on top of his game elevate the show.

3. Legendary icon status. Bernie Mac, Chis Rock, Deon Cole, Steve Harvey, Cedric the Entertainer, Mo'Nique, Lil Rel Howery and MANY other comedic stars have all graced the stage at one point or another.

4. More "color blind" than many north-side venues. Even though J&N is  described disparagingly by some as an "urban club" the fact of the matter is that every week comics of all backgrounds get the opportunity to perform, many of which (eventually) go on to feature. 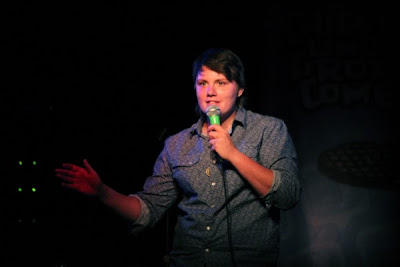 Ever Mainard's Final Chicago Show. Mainard had a great last night in Chicago surrounded by friends and fans who came out to support a fantastic all female line up. She's moved on to L.A. this week and will be missed in the scene for sure, but don't worry everyone, she'll be back in September to open for Moshe Kasher at the Second City's Up Comedy Club.

Bill Cruz' set.  Caught Cruz doing a quick five minute set as part of the nasty show this past Saturday at the Laugh Factory. Dude killed it. As loose and confident as ever, Cruz should be on your radar as one of the best comedians currently working in Chicago. Cruz has become a stalwart of the Chicago Stand-Up Comedy scene in the last 8 years performing at the best venues in town like The Lincoln Lodge, Zanies, Laugh Factory, CHUC and numerous other independent Comedy showcases. Expect big things from this cat in the next few months.

Lisa Laureta's set. Also moving to L.A., Lisa was in tip top from as part of the CHUC's line up on Tuesday night. Laureta's a great example of hard work and perseverance paying off.

The Make Yourself At Home Comedy Showcase.  This is a HOT new showcase with great crowds, and great lineups. Danny Kallas headlined last week and smashed it. If the producers keep it up, it will definitely be one to watch.