Weekly Top 5 time! As stated previously this list is subjective, based on opinions and only covers events we actually went to. So of course, we missed some shit... Feel free to send links to your favorite events. Here are the 5 best things that happened last week. 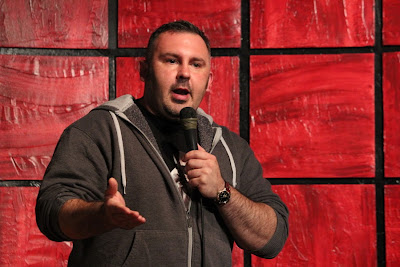 The Chaser Open Mic @ Comedy Sportz: Went to Comedy Sportz last night to check out the scene, a great room, but not for the obvious reasons. Was actually a slow night it terms of crowd, and there were some no-shows at the beginning of the list. But this occasionally happens to all mics, no matter how popular. What I dig about the The Chaser is, it's a really solid space for comics to get their WORK on. Which is apparent by how many veterans show up to perform tighten up sets (see below). Ideally you go to an open mic to try new material.  No point in covering the shit that works. You want to try the new and underdeveloped stuff. The Chaser is a great room to do this and that's because of, first and foremost, Jamie Cambell.

Cambell recognizes there are other mics going on, and even welcomes those coming from other rooms. His energy dictates the flow of the night, loose as fuck, but also running a tight ship (if that makes sense). He even stops the show momentarily with a few etiquette tips for late comers trying to sign on the list ("shut the fuck up!"). But then immediately starts riffing on the apparent theme for the night -"large dumps and old puss". Another element that keeps this room consistently good is the high skill evel of guest hosts. Scene stalwart Reena Calm (producer and comic) made the best of a slow start with constant witty riffing and kept the night on track like a pro. Last but not least Comedy sportz is also a proper theater with professional lights, sound, great seating, a full bar and pro staff. Still one of the best Open Mics in Chicago
The ComedySportz Theatre, 929 W Belmont, Tickets: 773.549.8080 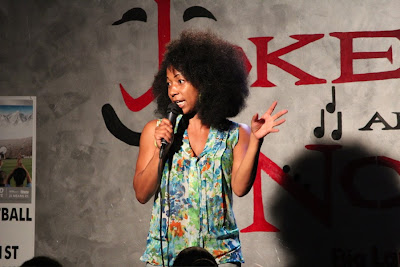 Vanessa Fraction working it Out @ Jokes and Notes: This was a real treat. Caught Vanessa Fraction performing a "tighten up" set ahead of her forthcoming album recording. A great set. Smart and hilarious. If your not familiar you should be. Fraction was a featured comedienne at Just For Laughs Comedy Festivals in Montreal and Chicago, has been featured on HBO’s Def Comedy Jam, BET’s Comic View, was in Barber Shop 2, has been on  the The Rickey Smiley show, writes for The MoʼNique Show and most recently served as comedy writer for BET’s 106 & Park. Basically she has more TV credits then you can shake a stick at AND she tours around the world performing comedy. Plus her cute freaking face is on the the WALL of Jokes and Notes, one of the best Clubs in Chicago, you don't get more street-cred then that that. Catch her in chicago if you can. 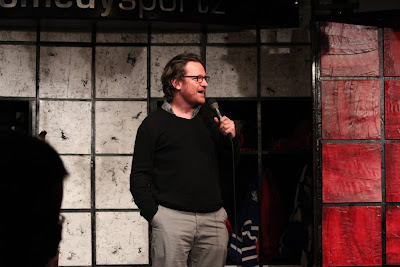 Adam Burke working it out at The Chaser: As we said The Chaser is a great room for veteran Chicago comedians to work out new material. And Adam Burke did just that last night. Adam is a fixture in the Chicago comedy scene and I've probably seen him go up over 50 times, but last night he performed a set of brand new material I've never heard before. LOVE that shit. Burke, Originally from the UK,  has appeared at the Bridgetown Comedy Festival in Portland OR, and part of the Just for Laughs Chicago festival for three years running. In addition, he has opened for a wide variety of comedians including Jeff Ross, Maria Bamford, Bo Burnham, Brendon Burns, and Jake Johannsen. 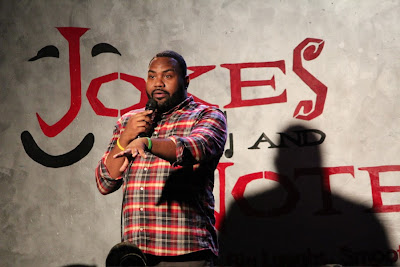 Davey Boy Helem: Love watching a comedian turn a corner. Davey Boy Helem gets better and smarter every time he goes up. His material last week at jokes and notes was the crowd favorite hands down (the Biggie Smalls, Precious routine is ridiculous). A local comic and producer, Helem has worked hard as hell on both the north & south sides of Chicago. It's good to see that hard work starting to pay off. Case in point - you can Catch Helem this week, performing as the feature act for Tony Rock at Second City's- Up Comedy Club. Do it!
230 W. North Ave, 3rd Floor, Chicago, IL 60614, (312) 662-4562 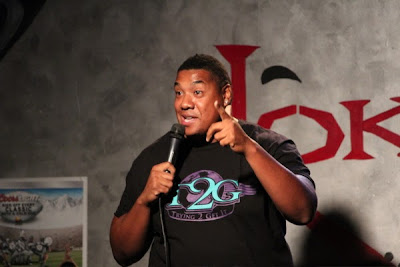 Marvin Phipps. A couple of weeks ago we posted in a Weekly Top 5 segment about how Jokes and notes was one of the best mics in the scene. What we did not mention was how hard the host has to work to make it that way. Well, we went back, and there is no doubt about it, Marvin Phipps is working his tail off at that club. It ain't easy being the house MC for an open mic night, especially at Jokes and Notes. But Marvin makes it look effortless. His energy keeps the crowd in check and on track. A bit rude and crude, he keeps it real as he see's it. You can catch him every Wednesday at Jokes and Notes.
4641 South King Dr. Chicago, IL 60653 (773) 373.3390