Lots of ground to cover today: Several hot showcases, some big names coming to town, & a couple of new open mics... So let's get right to it. Check out what's popping tonight and through the week.

CYSK
at Timothy O'Toole's
Comedians You Should Know is still one of the best rooms around. Mike Lebovitz - Host
Kenny DeForest
Marty DeRosa
Danny Kallas
Will Miles
Joe Kilgallon
Tonight!

Comedy Central's "Up Next" Showcase
at the Chicago Improv Comedy Club in Schaumburg, Illinois
This is in Schaumburg and we usually don't plug shows in the burbs, but this is a "Comedy Central" sanctioned comedy talent show, so wanted to put it on peoples radar. Be worth checking out if your in the area.
3420 W. Grace, Chicago, Illinois
Tonight!

The Velvet Jones Comedy Show
@ The Velvet Lounge
Hosted by Calvin Evans & Davey Boy Helem
With "Joey Thee DJ"
According to Davey Boy Helem this a going away party of sorts for a stalwart of the Chicago comedy scene: comedian Clark Jones. "Come send Clark Jones out in style!! He leaves Friday so come out on Thursday and celebrate with Mr. Jones one more time for awhile"
67 E. Cermak, Chicago (South Loop)
Thursday! 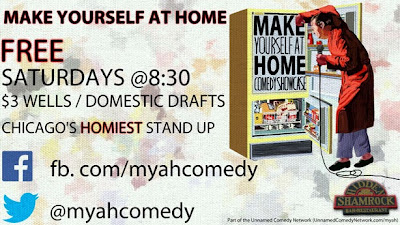 STAND UP STAND UP PRESENTS: MIKE WILEY
At The Crocodile
Recommended.
Thursday!

RYAN DALTON @ THE COMEDY BAR
At The Comedy Bar- Chicago

A hangover brunch starts at 1pm
Sign-up at 230, Show at 3
Hosted by Tyler Jackson and Danny Maupin - they put up as many open mic slots as they can so get there early...
Saturday ONLY! 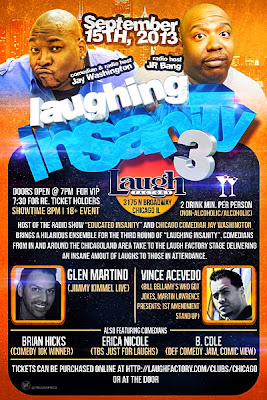 Laughing Insanity #3
at the Laugh Factory Chicago
Nice Sunday lineup at the world famous Laugh Factory.
"Chicago comedian Jay Washington brings a hilarious ensemble for the third round of “Laughing Insanity”. Comedians from in and around the Chicagoland area take to the Laugh Factory stage delivering an insane amount of laughs to those in attendance."
GLEN MARTINO (Jimmy Kimmel Live)
VINCE ACEVEDO (Bill Bellamy's Who's Got Jokes)
BRIAN HICKS (Comedy 10k WINNER)
B. COLE (Def Comedy Jam, Comic View)
Sunday! 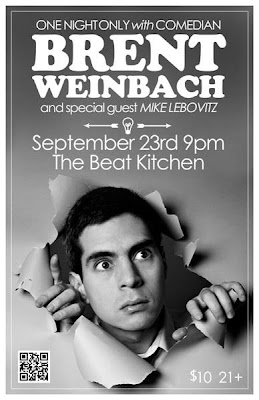 @ The ComedySportz Theatre
Some of the best comedians in Chicago pass through here every week.
Mondays!

Tommy Davidson LIVE! @ Chicago Laugh Factory
He's been seen on more TV than you can shake a stick at, scores of Hollywood movies, and has performed at sold-out comedy clubs & theaters and all around the world. Now Tommy Davidson is coming to Laugh Factory Chicago for one night only! Just be there.
Featuring Tommy Davidson, Kellye Howard, Joey Villagomez.
Wed, Sept 23, 8 PM.


Brent Weinbach @ Beat Kitchen!
OK this is a few weeks away but should definitely be on your radar. Michael Sanchez (Comedians You Should Know) presents L.A. comedian Brent Weinbach in a very special, one-night-only performance at Chicago’s Beat Kitchen. The magnificent Mike Lebovitz opens.
Sept 23!

The Lincoln Lodge Presents EDDIE PEPITONE!
at The Lincoln Lodge
Pepitone is a monster, this show should be on your "shows to see" list. This show will SELL OUT.
Sept 27th.