After nearly a year and a half at the helm, the sergeant is stepping down. Maggie Sargent is leaving her position as Head of Operations of Laugh Factory Chicago. In her time here, she has turned a brand new comedy club in a city with an already saturated market into not only a successful club, but also a safe and comfortable place for comedians to grow. Maggie, previously a documentary film maker, entered the world of comedy head first. Like she does with each person she meets, she became genuinely interested and put her all into bringing comedy to the city of Chicago. And that she did.

Under her tenure, LF Chicago rose from a struggling new club stuck in the beer-soaked shadow of Lakeshore Theater, to a club in its own right that prides itself on supporting and nurturing young talent. That was all Maggie. She was at every show, watching sets, talking to comics and building relationships. She was around town at showcases and open mics. She was always open to listen to a comic’s new idea, or a staff member’s pitch for a new show. She loved people and she loved creativity. It was those two attributes that not only made her a great club runner, but also a great person.

Okay, I’m going to stop talking about her like she’s dead. She’s very healthy, and as a person that sits next to her on a daily basis, I can confirm that she eats many indiscernible green meals that smell very “healthy.” But alas, she’s moving on to the next chapter in her life, one in which I’m sure she’ll be successful. And while she’s not dead, she is a lot of things. She’s smart, she’s tough, she’s incredibly generous and monstrously talented. She’s creative, curious, fun, hard-working, energetic with a small body and a gigantic heart. She’s a lot like a good joke. She’s short, polished, unique and honest.

For the last nine months, she’s been the greatest boss a person could ask for. She has taught me so
much; from how to write an email to how to politely suggest to a comic that his bio is one of the worst pieces of trash ever written. We’ve spent hours discussing comedy theory and brainstorming new show ideas. When I was a lowly intern, Maggie could have, should have, and almost did fire me for being a worthless, lazy idiot. She didn’t. She gave me a second chance, and for that I am eternally grateful. I love Chicago comedy, and I love this job and I love this club and I can’t imagine it without her. But because of her, we’ll be fine. She leaves behind her an every-growing club, a competent staff, and an army of the greatest comedians this city has to offer. Maggie Sargent will go on to accomplish amazing things, but I hope that years from now, when she’s our first vegan president, she’ll look back on her time at Laugh Factory Chicago fondly. I don’t think I’m alone in this sentiment. Thank you Maggie! You are an inspiration.

Here’s what some other folks had to say: 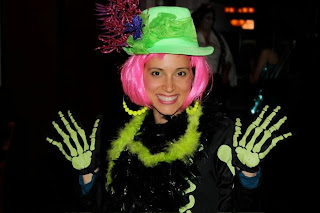 “Maggie was a true inspiration. One of the smallest, yet biggest things she contributed was her smile and positive attitude at all times, every day. Always wanting to make things better at the club. Always listening to new ideas and actually seeing them thru. Always willing to sacrifice her time for the good of the club. I loved her work ethic and her inability to "settle" on something until it was perfect. I will miss her greatly as a boss and as a friend. “
-Michael Larimer

“Maggie's impact on the Chicago comedy scene is obvious. The transformation of the Laugh Factory during her tenure was insane to see ups close. It went from being sparsely attended to packed what felt like overnight, and she did it with comics that live and work in Chicago. She is very passionate and consequently always had an idea to run by me about ways to make the club better not only for business, but also for comics. She took great interest in making sure comic felt appreciated by the club and I appreciate the shit out of that. Ok, I'll stop talking about her like she's dead now. Best of luck with whatever is next!”
-Kenny DeForest

“Maggie has been a big part of the Chicago comedy scene and club scene over the past year as well as my personal growth and life. I owe a lot to her and her honesty and she is living proof that this business isn't full of ruthless bitter titan men in suits. Maggie has always been sweet, nurturing, and giving and I'm going to miss having her around but wish her the absolute best on her future endeavors and know she'll be great at everything she does. I can't thank her enough for the opportunities she's given me and I hope to one day prove all the kind things she's said about me and my comedy to be true.”
-Thanks and love, Martin "Eat That Ass Like a Birthday Cake" Morrow

“Maggie has been a real player in the Chicago comedy scene. Her positive contributions at the Laugh Factory have been game changing and her presence will truly be missed. It's been a sincere pleasure to work with her in a professional capacity, and I wish her the best in all future endeavors.”
-James  Allen Kamp

“I don't like most people. I really like Maggie. So much so that I allow her to call me "Danny Doodle". I wish her nothing but the best and am sad to see her go.”
-Danny Kallas

“I have never had the privilege to work along-side someone so passionate, dedicated and assertive as Maggie. (Not to mention fun, kind & caring!) The list of skills Maggie has fostered improvement within me is long, but what it comes down to is that I have simply had the opportunity to learn from the best. She is driven by love: the love of comedy and the love of those around her, and she deserves to be immersed in it. I believe anyone that walks into Laugh Factory - customer, comic, or employee - feels the environment that she's created here, and walks out with a smile, and that's pretty special!”
-Emily Keck