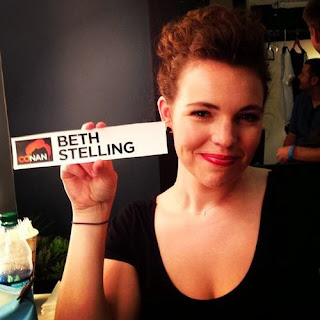 Beth Stelling returned to Chicago Tuesday night as part of a 6 night run at Zanies on Wells Street. I caught her at the Zanies Queer Comedy show where she headlined. Awesome show. The time in LA has been good to Beth for sure. Stelling if your not 100% familiar is a former Chicago based comic, was #2 on the “12 L.A. Comedy Acts to Watch in 2013” by LA Weekly, was a New Face of Comedy at the Just for Laughs Comedy Festival in Montreal and made her stand-up television debut on TBS’s Conan. We were able to get an interview with Beth after a stellar Zanies show on Tuesday night.

Comedy Of Chicago: Hi Beth, welcome back to Chicago! Does it feel good?
Beth Stelling: Yes it feels totally good, the show tonight was so fun... as a comic it's kind of like what you dream of, coming to do a show and having people already know your repertoire, obviously I worked a lot of new things tonight, but that's the dream to have people are already familiar with you, so they like you, that's why they came and they can laugh even harder. Obviously it makes the job easier.

COC: Kind of like preaching to the choir.
BS: Much easier, when your coming up and no one knows who you are, you have to prove yourself from the beginning of your set, and now it's a lot easier to perform for people who are like "yeah we like you! What do you have to say?"  I'm not saying I'm some crazy well know comic I'm just saying to come back where I started and now people are excited to see me... there nothing more that you could ask for.

COC: You look great, seems like LA is treating you well?
BS: I love L.A. I'm happy to be there. Chicago was so good to me and I've spent my formative years here and being in LA, it's a good place to be for stand up comedy, I mean  the best comics in the country are there, so I'm watching, I'm doing shows with them. Your elevated by being around it you know? Like you rise to the occasion. That's one of the great things about being there, plus it's warm... (laughs) whenever people ask what I like about it "uh it's always WARM" so that's a benefit. People complain a lot that there are not enough shows, but I've never been  someone who needs like seven nights a week. So its good for me and I don't have any complaints about how many times I get up. I know I'm lucky in that way, I know that not everybody feels that, but I get enough stage time and I'm happy. Also been traveling a lot more which makes me miss L.A. and that's a good thing. When your living in L.A. everything is comedy everything is entertainment, your very much  in it.. and so sometimes people like getting away for a little bit, but it keeps you driven

COC: It sounds like it's perfect fit for you.
BS: You know, first impressions are kind of everything there (in L.A.), I think.  I came fresh off of new faces Montreal, so I got like a little shoe in the door and so people were interested, people were like "who are you, are you good? Oh we know your good because you do that." So it was a great starting point for me and the scene is very warm and welcoming there - and it's vast. Its a big big scene

COC: Any chance  for another album soon?
BS: Oh man... I don't think so, (laughs) not because I didn't enjoy it but just because it's out and I feel good about it. I did feel like for some reason "I need to do this" and I did it. And now I don't think I need to do it. It's good that it's out there and I'm happy to have it it as merch and that's great.

COC: Yeah, never seen you sell (CD's) before, and tonight you were selling merch, it was like "oh snap" Beth is the whole package now...
BS: I know, I finally have something to "give" after the show... It would be more my thing, honestly, to sell like a funny T-shirt or something weird after a show, but traveling with that stuff... it's hard enough to make sure you have your CD albums with you. I certainly did not bring enough with me this time. I'm not the best at selling them cause I'd rather just have people be able to come up and talk to me without feeling like the pressure to buy or whatever... so I'm when packing I'm usually like "yeah 5 CD's sounds good" (laughs). I mean I brought more then 5 but I sold like the majority of them...

COC: You sold out already...?
I mean have at least seven left, (laughs) I'm the worst!

COC: So how did this weeks booking at Zanies come about?
BS: Bert and I have always been in touch he's been really good to me ever since I started, and Martin and all the staff there have all been great and supportive. Adam Guerino had a big part in it also, because he wanted me to come back for Queer Comedy and so he tried to set up a week for me to headline...

COC: Awesome, thanks so much for talking with me Beth.
BS: Thank you!