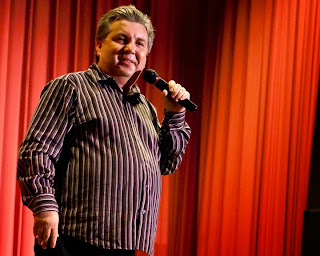 Every live performer who earns a living in front of an audience no matter the genre can always remember in vivid detail their very first time on stage. Good or bad, it’s a memory that will never go away and is true for anyone and everyone from actors to musicians to comedians to strippers. That first time on stage is a life milestone, like losing one’s virginity or graduating high school. From my experience of watching hundreds if not thousands of people try standup comedy for the very first time, I’d have to say it’s a lot more meaningful to do than to watch. It is rarely exciting from an audience member’s point of view, but a very crucial step in the performance process. Taking that first leap and getting on stage takes unbelievable courage, and those who do it have my immediate respect and admiration.

I’ve been there myself, and not everyone has the intestinal fortitude to get up there and actually make it happen. Actions do speak much louder than words. I can remember my first time on stage as a comedian like it was yesterday. It was at a jazz club in Milwaukee that has long been torn down called ‘Sardino’s’, which is where Al Jarreau started his singing career. It was a Monday night comedy showcase, and I had no intention to perform. The host that night was a wonderful soul named C. Cardell Willis who would eventually be my comedy mentor and close friend. Cardell asked at the end of the show if anyone wanted to get up and try comedy, and my hand shot up before my sense of reason could stop it. I had no preset act whatsoever, but I had seen the other acts that night and quite frankly wasn’t impressed by them. I remember walking on stage to a smattering of applause, and turning around and seeing a light in my face that looked like I was about to be abducted by a flying saucer. My mind was erased of any and all ability to remember anything, and time itself screeched to a jolting halt. It was scary.

I did have the presence of mind to know I needed to say something, so I fumbled and stumbled my way through about four minutes which seemed like four years of hard prison time. I couldn’t get my lips and tongue to work, and my legs felt like noodles. It was an out of body experience. But somewhere close to the time I was about to get off stage, I noticed a couple making out at a table in the front row. It was distracting, and I found it to be extremely insulting for them to do it in the middle of my maiden voyage into comedy superstardom. I wish I could recall exactly how I worded it, but I ad libbed a line about the guy having better hands than the Green Bay Packers. 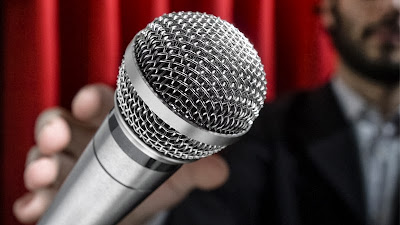 It got a solid laugh, much more than anything else I had said. That was my first hit of comedy heroin, and I have been hopelessly hooked ever since. That zap of electricity that permeated my entire body was the biggest rush I have ever felt before or since. That amazing buzz is what has kept me coming back all these years. Unless one experiences it firsthand, it’s difficult to put into mere words how intoxicating that feeling is. I hope everyone alive gets to share that experience. I often wonder what would have happened had I not gotten that first big laugh on my first night on stage. In retrospect, it probably wasn’t nearly as big as I remember it but for a total rookie as I was it was an electrifying sensation for the ages and it changed my life forever in a positive way.

I wish I could say it went skyward from there and the rest was entertainment history. Not so by a long shot. It was more like entertainment heresy, as I kept making a mockery of what I thought comedy was supposed to be. I don’t recall many details from my next several attempts other than I didn’t come close to equaling that dramatic pop I got on my first night. It all melted into a blur. I don’t remember a whole lot of what any of my material was back then other than two or three painfully weak premises, but I know I had no clue as to how to present any of it in an interesting or entertaining manor to the ‘audience’ at Sardino’s – which was mostly made up of comedians. The degree of difficulty was extremely high, but I knew I wanted to continue and work past the beginner level. For all the stupid things I did – and there were many – I did have the right idea of knowing I needed to keep doing it to get better. I kept going back every week and throwing in all the wacked out ideas that would strike me. I was clueless, but I knew it so I just kept showing up. 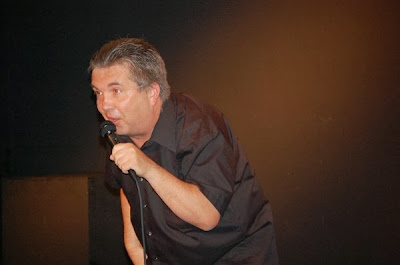 I watched the other comedians closely, looking to learn as much as I could from both the good and the not so good. I learned that was very possible, and I didn’t judge anyone. I was there for a chance to improve, and I absolutely did over time. But those first dozen or so times were brutal. I tried anything and everything from wearing ‘funny pants’ to acting ‘extra wacky’ on purpose, whatever that means. I was trying to figure out the magic secret that might help me get laughs in any way possible, and I thought it would just come to me if I got up there and looked for it. How naive that was, but I’ve seen countless others do it after me and I still see it today. It’s a mistake.

For the official record, there has never been and never will be any magic secret, formula, pill or bean that will replace the only real ingredient that will make anyone better – HARD WORK and lots of it. This is one of the few rules that has no exceptions, and the sooner one realizes that and accepts it the faster real progress can be made. ‘Shortcuts’ actually take much longer in the end. The only way to get better is to keep getting on stage over and over and over again, and then it has to happen some more. Stage time to a comedian is like oxygen, but there should be a purpose and a plan in place to benefit the most from it. It’s like working out at a gym. There needs to be a well structured workout plan in place, not just random roaming between barbells and machines.

Those first dozen times on stage are probably going to be pretty rough for everybody at least at some point. You’ll blank out and forget all your material or have to follow a hot act that lights up the stage right before you go on. Any number of things could rattle your cage, so just roll with it. My friend Bill Gorgo wisely suggests not asking how you did those first few times, but instead asking how you felt. That’s much more important, and I completely agree. You won’t be brilliant your first dozen times. Plow through anyway, and know “The Dirty Dozen” has a useful purpose.

Dobie is a nationally touring, award-winning comedian with 30 years under his belt. He has numerous TV credits and has worked with notable performers like Jay Leno, Jeff Foxworthy, Jerry Seinfeld, Robin Williams, Tim Allen, Drew Carey, Andrew "Dice" Clay, Richard Pryor, Sam Kinison, Dennis Miller, Chris Rock, and many others. You can catch Dobie headlining this week at Zanies