I have been doing comedy for 7 years. Lived in 3 different cities and watched many comics come and go, and Chicago is something special. A mecca of burgeoning talent with a beyond spectacular track record. In recent history we had TJ Miller, Nick Vaterott, Kyle Kinane, Hannibal Buress and Kumail Nanjiani to name a few. They all developed different styles and voices but the one thing in common is that they all grew here. So why in holy hell are we so closed minded on great comedy here? It needs to be known talent does not live in a type or bubble! This list is made for those I see who are underutilized or under appreciated in our scene. Yes we all respect CYSK, Lincoln Lodge, and Adam Burke (formally Cameron Esposito)* but there are shadows in this city that deserve the spot light, too. Im here to shine that light on them. *(I believe they all are fantastic comics as well, I just wanted to be a dick). I mean every word that follows! So don't ask me after reading it. 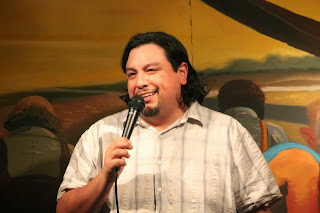 He's a gay man that hit on me when I was newer and 10 lbs lighter, but he is also a man that has, over the years, impressed the fuck out of me comedically. Everyone knows and loves him, sure, but somehow he isn't thought about nearly enough when it comes to great Chicago Comedy. Hard truth, Bill's own fear of acceptance gets in his own way which doesn't allow him to really blossom into where he should be. But I feel it's the Chicago comedy scene's fault. Why? Well how do we expect this "beloved" man to feel confident doing shows in other less supportive cities when he doesn't get the true comedic respect he deserves right here at home. If you 'love' Bill but never mention him in conversation about great Chicago Comedy I say from the bottom of my heart "FUCK YOU, YOU TWO FACED SHIT"! 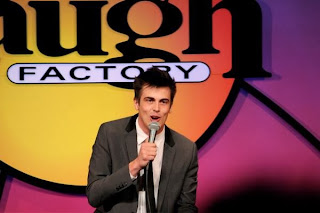 This giant mouthed fuck can be a hack from time to time, but who isn't? Jeff separates himself from the rest of us by admitting it. Then he owns it. Then he makes fun of it. And then, very skillfully, uses a very intellectual brain and crafts it into a completely original lovely piece of art. He is self aware which is more than I can say about 95% of "original comics" I've seen here in the city. Oh you have a dating joke that kills and your masturbating bit is running up to 3 whole minutes? Well let me say most sarcastically "Way to step outside the box, you gifted humorist". Jeff and I have shat on each others' acts for years now and for that same amount of time he has had the most consistent growth amongst all comics in the city. Find a comic that can be more likable more quickly on stage than this Tim Burton-esque gangly man, and I will quit comedy. We were both hack-tastic until Jeff turned both his hack and this hack into a fan. 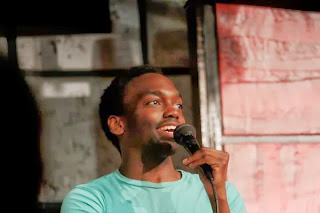 Sure everybody knows Farty Marty but very few know Martin Morrow. Hard working, shit shooting, never the token fucking black comic, Morrow. In an industry that pigeon holds anyone who isn't the standard (white male) Martin pushes back as a black woman, and hard. All kidding aside Martin has arguably done a lot in Chicago which might make you wonder why he is on this list. It's because I know he deserves more. I want everyone to start saying this now "Martin is a great comic" because when he is on your favorite TV show in 10 years, you will not be able to bullshit me and say "I always thought he was funny". Fuck you, because you never passionately voiced it. 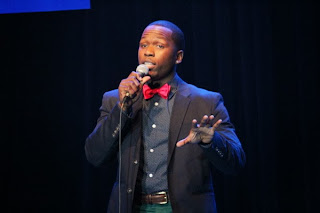 Calvin 'MF' Evans. I swear to God if you are reading this and you say you are a Chicago comedian but still have no idea who I'm talking about find a street needle and inject yourself with rusty AIDS heroin. This dude is a beast. A BEAST. Kills white corwds. Kills black crowds. Kills mixed. Kills hyped. Kills dead. Kills anyone who is paying attention. And rarely do I see this dude in the North-side shows unless he is producing a stellar show himself. Quick! My impression of North-side comics "These guys are the best comics in Chicago. What? No, I've never been to the South-side. I don't think I could do well down there". Good game plan, because it allows talent like Calvin to polish up and shine brighter when you decide to start paying attention. 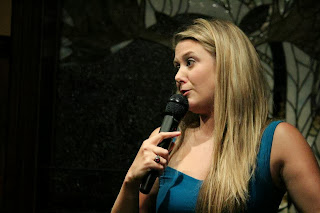 Ok, I have to say this now and on the record, she used to piss me off. Every time she told a joke I thought 'Why the leg kick'? And 'Is she really that smiley'? But I admit now and forever that she is amazing! This turd has been doing stand up a faction of the time I have and has figured it out way past my own abilities. Recognize through Ali, people, that if you work hard you can become a god damn hilarious son of a bitch. And you know what? Ali managed to become a power house whilst being a fucking great person THE WHOLE TIME. Tell her she is funny then take a minute and learn a lesson from her. I know I did. 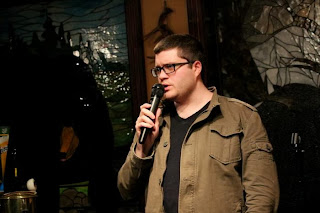 Oh man, probably the most unbelievable and controversial one on this list. Listen, I know he is an ass. He knows he is an ass, but do me a favor and book him once. Just once at your fucking "special" show, and see if he doesn’t blow your hair back. Collin is a self doubting, self sabotaging, self destructive ass, but which of us isn't? That all sounds like the mold of a stand up comedian we all came from. Which makes me think that the biggest problem comics have towards him is that they are forced to face all of their own imperfections and annoyances face to face with him. Now, Colin, I KNOW your egotistical ass is reading this, so hear me well: you are better than what you put yourself down to; when you are at a show emoting your very real pain nobody cares to learn about, it makes you an endearing, beautiful person. Also fuck you. 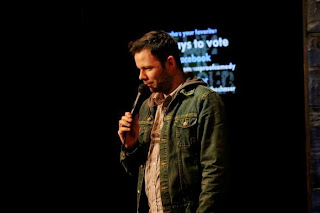 What a drunk, loud, dumb, crude Irish son of a bitch, but you know what? He is also a hard working, insightful, quick witted son of a bitch. He is an entertaining comic who can also put together wonderfully entertaining shows. "Entertainment", that's the name of the business we are in, right? Not a nostalgic, mutual masturbating business of high school bullshit. Ok, ok, running great shows in multiple cities means nothing. Fine. Have any of you punks seen this man work in a half hour time frame? I have, and I have seen him thrive in this spot weaving stories for the entertainment of everyone in front of him. He may think he is terrible but I very much disagree, but NEVER to his face. 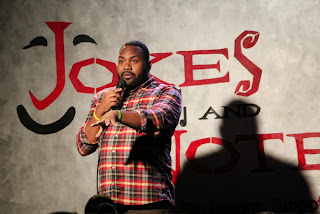 First things first, Davey, If I stop doing "Bone Thugs" you have to stop doing "Precious". Now, let me ask Chicago, are you blind? Why is this man not on every show, pimped at every festival, featured in the red eye, and on the radio? This dude supports. This man writes. This man is hungry as shit. Northside, southside, in the city, outside of the city ready to work hard for his slice of the pie. If you don't know him, do yourself a huge favor and get to know him because as long as he stays hungry for success Davey is going to blow up big within the decade. And yes, this whole paragraph is a well crafted fat joke but that doesn't make it any less true. 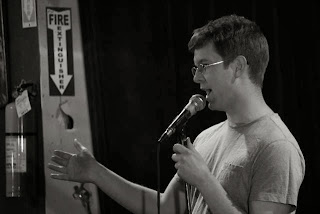 Simply put I honestly and deeply hated Jacob until I spent a week working with him last year and my God did he prove me wrong! I still believe Jacob Williams is "The Pancakes of Comedy", meaning for the first 15 minutes Jacob is all you want but after that you really want some bacon. But you know what? Pancakes FUCKING ROCK! This douche pickle has had more work, more TV credits, and more jokes than all of us combined and still you all judge. 'Meh he's so clubby and traditional'. You can talk shit when you've proven yourself half the comic he is to everyone - not just friends and people who live exactly like you. Fuck them Jacob, I still hate you but I love you too, man. 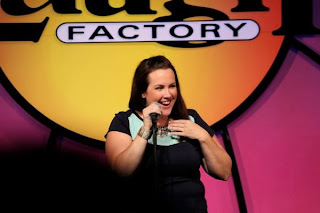 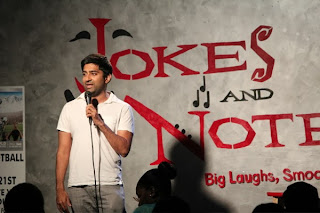 Saurin is a stand up comedian. An Improv comedian. A producer. A writer. And a hip hop artist. This mother fucker has done more forms of entertainment in 6 years than most hope to do in a life time. I've witnessed with my own eyes Chaux perform above and beyond the expectations of every single type of person. Its all wonderful, but nobody gushes over his ability? At best you all say "Saurin? Yea he's nice". Nice? I piss on those condescending hollow words. This man might be an entertainment genius. As an audience member you first see a man who is a minority amongst minorities then after 10 seconds you NEVER think about it again. His act is about Chaux and only Chaux which means it's nothing but funny. Now go talk about how your poor or can't get a date or how Irish you are... wait. 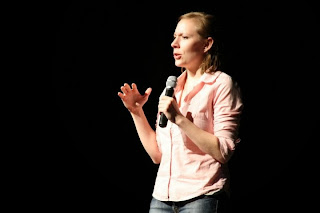 Here you go M, #1 finally. You have your head way too far up your own ass if you didn't see this coming. Chicago, if you listen to nothing else on this list, listen to this... Quite simply, this comic WILL be famous. She works harder than you. She is smarter than you. She has more will power than you. She has more passion than you. She has it all and she has it in spades. So when she is on Letterman and schmoozing with her doppelgangers, Tina Fey and Amy Poehler, you will be at some shitty one-nighter or open mic saying "She was great I, blah blah blah blah blah". Screw you! Stop segregating funny, Chicago! Watch her sometime and you will see a comic master mind. Finally, Emily Galati in 5 words. Impatient, Bitch, Loyal, Comic, Genius. Truth and honesty towards a one-of-a-kind mind.

I wrote this to be as confrontational as possible to hopefully wake up our scene. We are not New York. We are not LA. We are something much better. We have just as much opportunity, more ingenuity, less pressure, and, I hope, more camaraderie. We should be a scene that allows creativity and variety because, very simply, we can. The second we start focusing in on a certain style as the only place for funny is the second this funny womb starts to decay. Stop being so closed minded and open your mind to all ideas and experiences of comedy. Nerd out - that's what we are here for! Traditional style does NOT mean hacky. Be better than a drunk audience member and give each other the benefit of the doubt. Listen to the written material and study the craft from all angles. We are all Chicago Comedy and we should all claim each other proudly.

Contributing Writer - Sam Norton
Norton is a writer, producer and underrated stand-up comic in his own right. A seven year veteran of the comedy game , Norton works as hard as anyone, you can catch him performing at showcases, clubs and open mics all over town.
Newer Post Older Post Home