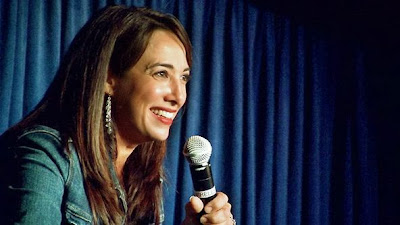 I love to see comedy wherever I go. So when we were in Chicago last week, we decided to get tickets to Zanies. We were only in town one night and the show that night was Patti Vasquez' one-woman show, Lipstick Mom.

I’ll say this about both Zanies and Vasquez: they know what they do and they do it well. Zanies is a classic comedy club with tons of history and a very polished presentation. We spent a few minutes before the show checking out the hundreds of head-shots that line the walls: everyone from Sinbad and Drew Carey to Seinfeld and Jay Leno. Not only does it give Zanies a clubby, authentic feel but it was fun reading the (some affectionate, some crude) personalized messages that the comics wrote to the Zanies management. The room was not packed but there was a decent turnout for a Monday night - at least 50 people. The ticket price and two item minimum made it about a $25 night for each of us. 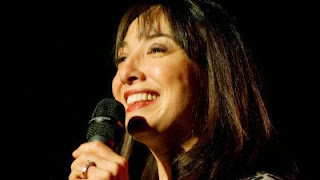 Vasquez told the crowd that Zanies is her “homeroom” and that she's been performing there for over 17 years. Though the show had no opening act, Vazquez played all the parts seamlessly. When she introduced the show at the beginning, I thought it was going to be a niche show: you know, the type of show that is really funny for a certain demographic (in this case, middle aged women) and not that funny for everyone else. I was particularly concerned because I was with two guys and I wanted to be sure we would all have fun.

In this case, Vasquez had all of us laughing about her exploits and adventures. She covered the gamut of topics from first dates and sex (you have to hear her explanation of the “starfish pose”) to the not so subtle difference between gyno vs. prostate exams. Only her section in the second half of the show about her parents and her kids was a little more narrative and a touch more serious; it felt more like a one person show and less like traditional stand-up. That said, her delivery was rich, the storytelling was top notch and she kept the audience engaged throughout.

Vasquez also handled the audience like the pro she was. Unfortunately, she was interrupted by some enthusiastic “audience participants” (not quite hecklers, but equally annoying) sitting in the front row. Obviously no comic wants to alienate an audience member who is so into the show, but at a certain point, the audience appreciated her efforts to make the show work for everyone, not just them.