Zanies, is the longest running stand-up comedy club in Chicago. Dozens of other clubs have come and gone (and more continue to pop up), yet Zanies has withstood the hard test of time. That's just a fact.

Known for giving a jump start and boost to careers of the most legendary comedians in the game, Zanies has achieved it's own iconic status as a comedy king maker of sorts. Jerry Seinfeld, Eddie Murphy, Jay Leno, Sarah Silverman Tim Allen and Dave Chappelle (among many other major stars) have all performed there. The proof, as they say, is in the pudding or in this case on the walls (among the hundreds of pictures of famous faces that line every inch of the club). The space itself is a living testament to the comics who have passed through it's hallowed doors over the years. Zanies is currently in the midst of it's 35th anniversary and throughout November big time headliners and local comics alike will take to the stage to help celebrate. We interviewed Bert Haas, Zanies executive vice president (with the club since 1980 when he started as a waiter), over the phone and talked shop.

Comedy Of Chicago: Congratulations on celebrating the 35th anniversary, what do you think might be the secret to Zanies Longevity?
Bert Hass: Number one, Consistency. In terms of talent and the service/customer experience. And also we knew a long time ago that we were gong to specialize in stand-up comedy. A lot of different clubs over the years, have tried stand-up and then they say "or were going to try some improv", or "no were an improv club and now lets try some stand-up", were going to do this, were going to do that. People know when they come to Zanies, what they're going to get and we try to provide that on a consistent basis. 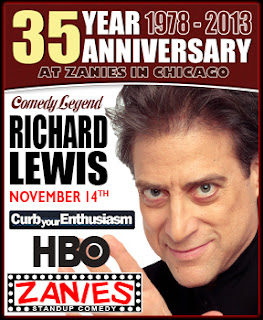 COC: You have an pretty stacked line up this month, everyone from Gilbert Gottfried to Richard Lewis. How did  you come up with the line up for this 35th year event?
BH: What I was trying to do  was combine some familiar faces and we were very lucky to have Richard Lewis, I mean obviously Richard is too successful to be working a 100 seat club on Wells street, but he's an old friend. I've know Richard since 1984 and so he's a very old friend, he's very loyal to us, as is Bobby Slayton and of course Jake Johannsen is one of our regulars, Jimmy Pardo is also an old friend he started in Chicago, he started with us, and so I just wanted to bring back some familiar faces. I also wanted to highlight some new people. Micheal Palascak who is of the younger generation but very successful from Chicago and Pat McGann, also some of the funniest females comedians, never have I had these four woman on the same show because I could never book them at the same time. So I was trying to give a nice mix of  old and new.

COC: Speaking of new, you had 35 local Chicago comedians booked on Nov 4th.
BH: That was a fun show, we also did that for our 30th anniversary where we had 30 comedians and it was a blast because it was a chance  for all the comedians to come together, goof around and have fun, and so I said what the hell, if it worked for 30 lets try 35. It cant be any bigger of a train wreck. What's so funny is that we loose 35% of our seating with just with the comedians, we barely have enough room for the audience laughs). 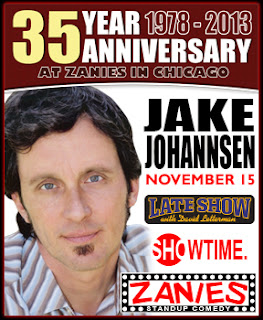 COC: How did you come up with the local booking for that?
BH: You know I just put the word out  and I said if your available for this day I'd love for you to be part of our celebration and had a great response. A lot of guys said they were not available, they were previously booked and they were disappointed, but in all I had a great  response and so everybody that contacted me that I felt had worked for zanies or had showcased for me and I knew could do a nice job I put on the lineup.

COC: On the19th & 20th you've booked a show called Ten For Ten, what's that all about?
BH: Again, it's a chance  to highlight Chicago comedy, you know Chicago's a real hotbed for comedy right now. Comedians are coming from all over the country in order to be part of the scene here, and present company excluded, I've never feel that the media supports the local talent. Everybody has to leave town in order to be discovered, and this has just been a stone in my craw for years, of course they go to Los Angeles or New York, get"discovered" and then we welcome them back with open arms, and yet they had performed her for years and they never got any kind of support! So I'm just reaching out to the local community and just saying hey! These are Chicago people you need to be aware of. It's kind of like I did with Hannibal Buress 5 years ago. I said hey, you people need to be aware of this guy. He's going to become a star. Micheal Palascak has been on every national TV show you can be on, and yet he doesn't get any recognition in Chicago... yet he goes to L.A. and  gets interviewed all the time because they want him for their projects. But here in town he doesn't get any respect and I just don't understand it. Pat McGann I believe, might be one of the finest MC's I've ever seen. People say "well he's at Zanies this week I guess he's OK"...  he's great! You understand he's going to  be a star? So that's what I'm trying to do with those Ten For Tens, I'm trying to  get as many local guys up there  so people can come out and enjoy and say "wow we just have this wealth of comedy talent here in Chicago".

There you have it, great shows remaining to be seen this month at Zanies, be sure to get out there and support Chicago comedy.