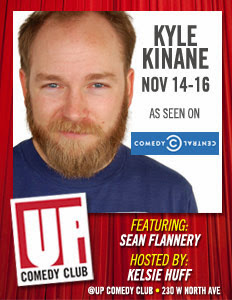 Kyle Kinane left Chicago nine years ago. This past week he was back performing all over the city. I got the chance to see him headline at the UP Comedy Club last Friday night.

Kelsie Huff hosted the evening. She was full of energy and charm when she took the stage proclaiming to the crowd “I am NOT a dainty lady” going into a story of how she may have freaked out a group of tourists with a totaly body hiccup fit on a crowded train and her mimics of it drew heaps of laughs. She read the at first tepid crowd perfectly and began doing crowd work with a man in the front row who had his leg half resting on the stage and wearing a Titleist golf hat. She approached the man and asked “Hey sir your leg is half on the stage and I am a little bit intimidated. And you have a really big knee. How do you even train that joint?” People lightened up and lost it when she said “Nice baseball cap. I mean Golf cap. You didn’t think I knew it was a golf cap did you? Or is it pronounced Tit-a-list?” This had won the crowd over and became a frequent call back and nickname for him throughout the evening. The energy definitely picked up and she brought up the Feature, Sean Flannery. 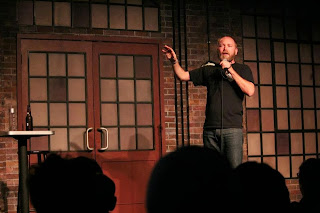 Sean, with utter ease, had the room in his control immediately. Opening with “Whenever I come back to Chicago I realize beer is practically free here.” And how he had become a horrible driver since living here. He told a few tales of his life in Cleveland and including jumping a ramp in his car during a blizzard, surviving an emergency landing on a flight, life in Chicago and the things he now says that are tell tale signs that he’s getting older. One being that he approached a group of girls at a bus stop and vehemently warned them that “Black ice is the REAL DEAL!” and another of how he lost his wallet and it was returned to him by a teenager and when he offered a reward his Dad left it up to his son to decide. But before he could answer he handed the kid a $20 bill and said “You go get yourself some ice cream!” It almost seemed effortless in his ability to transition from one story to the next each with more at stake than the last all while keeping the audience invested and interested. 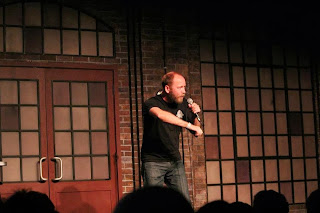 The crowd had completely let go and was on all cylinders listening and laughing to every word literally on the edge of their seats. And playfully he kept repeating “butt to butt” to give them what they wanted as they continued and contagious laughter filled the theater. He seemed carefree on stage, personable, and obviously likeable. All three performers for the evening were admirably polished and clearly well seasoned in their craft. Kinane had a non threatening way of saying “This is the ride I am gonna take you on – you can get on board or not either is cool with me” and that seemed to be his style of story telling throughout the evening until he exited the stage as gracefully as he entered it.

The following quote by Kyle pretty much sums up nicely why he does stand up for the past ten years and why he’ll do it for ten more:

“"It's what brought me into the mentality that there's no fame, there's no anything, just do what you love to do. Maybe the universe will let you do it for a living, and even if not you have to do it anyway."