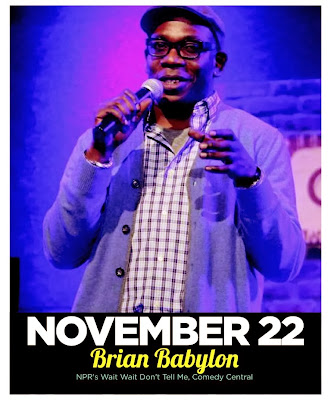 Wow what a week. Partied with some local stars of comedy at Jokes and Notes then we all went up to Coles Bar on Wednesday, now my head still hurts. Speaking of stars; WWE Superstar CM Punk showed up at the I SHIT YOU NOT!  anniversary show up at the The Lincoln Lodge yesterday. If you don't know anything about wrestling trust me, that's huge. That man is pretty much as big a star as you can get in the wrestling world, so Kudos to the producers, Michael Sanchez and Monte La Monte, for however the hell they got that to happen.

AS USUAL a whole sh*t ton of top comedy events are going down this weekend that we did not necessarily get a chance to plug in the Monday "What's Popping" segment. So... check out what's listed, then get out there and support some local comedy.

Freak Happening presents: Black Friday!//Fundrasier!
at saki - 3716 W. Fullerton Ave., Chicago, Illinois 606
Thanks to the efforts of the amazing Kris Simmons, this will double as a fundraiser to support efforts to rebuild the hardest-hit areas of the Chicagoland area by this past weekend's rash of tornadoes/storms. 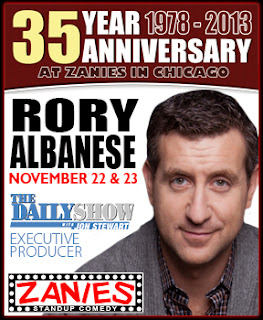 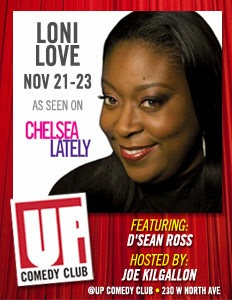 Loni Love
@ The Up Comedy Club - 230 W. North Ave
Comedy Central, The Tonight Show with Jay Leno, The Late Late Show with Craig Kilborn, VH1′s “I Love the 70′s/80′s/90′s, Comics Unleashed and Chelsea Lately -  Loni Love does it all...
Hosted by Joe Killgallon!
Feature - D'sean Ross
Do not miss!

MARTY DEROSA @ THE COMEDY BAR
at the The Comedy Bar- Chicago - 157 W Ontario, Chicago
HOST - Martin Morrow
FEATURE - Adam Burke
HEADLINER - Marty DeRosa
This will be an amazing show. Do it.
Fri - Sat, $5 off with code COC13

Improv Nerd with Michael Palascak!
at Stage 773 - 1225 W. Belmont, Chicago, Illinois 60657 Chicago, Il.
November 24th at 5:00 p.m.
MICHAEL PALASCAK debuted on The Late Show with David Letterman, The Tonight Show with Jay Leno and The Late Late Show with Craig Ferguson. He also performed at The TBS LOL Lounge in the Just For Laughs Comedy Festival in Chicago.... enogh said. Do it!