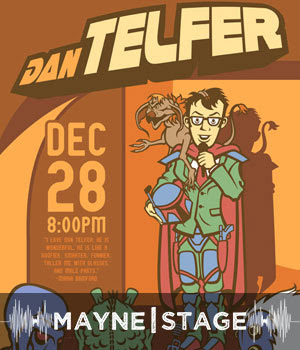 Dan Telfer has a great comedic resume, the majority of which he earned right here in Chicago so it's only fitting that he returns to town Dec 28th for one of his biggest headlining shows ever. If your not familiar, Telfer performed stand-up for 15 years in Chicago before moving to Los Angeles. He's currently a social media producer for Comedy Central. He's written for The Onion, was co-producer of "Chicago Underground Comedy" (one of Chicago's longest running showcases) and has toured with Maria Bamford, Brian Posehn and Patton Oswalt. Telfer has also performed at the Just For Laughs Festival (both Chicago and Montreal) and is perhaps best know for his stand-up bit "The Best Dinosaur," which became a viral video hit. Telfer was cool enough to chat with us about stand-up in LA, comedy in Chicago, and his upcoming show at the Mayne Stage.


Comedy Of Chicago:
Hi Dan! For those who don't know, how long have you been in L.A. and how's that transition been going for you?
Dan Telfer:
I've been out here since January and I have a job working on a show for Comedy Central so I certainly cant complain. 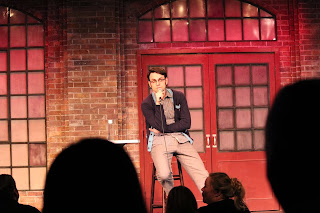 COC: Sweet, can you tell us about the show?
DT: It's @ midnight, it's hosted by Chris Hardwick, it's sort of a fake game show, a British style panel show, that airs after the Colbert Report on comedy central. Yeah it's a great time, I love working on it. Ive been doing that, I've been doing a bunch of stand up. I like it out here, I miss the weather though, I'll take all that snow. I like trudging through the snow... there were days where the Chicago public transportation (CTA) system would shut down, but that doesn't mean your job does... So there were days I still had to go to work but the buses were all buried and so I would walk from Rogers park to Ravens Wood in about three feet of snow. I miss actually having that kind of weather variety. Here in L.A. everybody  goes on about how nice the weather is but it's boring... The weathers boring.  I like it out here but the weathers stupid. I don't like going outside in general. To me good sun means... I don't know, still some clouds and a fun skyline... But here it's a big empty sky with flat buildings. Who wants to look at that? At least give me some gargoyles to look at.

COC: You mentioned that you've performed a lot of stand-up while in L.A., how's that been?
DT: Honestly its going great, I got really lucky. I've sort of had the long con going, here in Los Angeles. I came out here for 5 years, trying to do sets at really fun places and prop myself up to Los Angeles like once a year for a while and it sort of payed off for me . I've had people vouch for me and Ive been able to go up pretty often and I get to go up at great clubs here. I just did a  set at the Improv on Melrose in Hollywood, and this weekend I've got a set at Flappers in Burbank, and I still get to do a bunch of fun alternative shows. Ive been really lucky that the Nerdmelt Theater has been very good to me, in that regard. I've gone up there about twice a month since I've moved here. 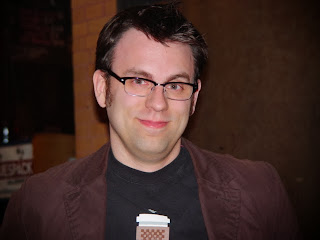 COC: You've got a big show here in Chicago at the The Mayne Stage, Saturday Dec 28th. Can your Chicago fans expect all new material?
DT: Well there's a chance Chicago people may have seen some of this material before, but it's all new in that none of it is on the CD I put out last summer. So hopefully most of it will be pretty new to everybody. I'm trying to record, so if we sell enough tickets and it sounds good I'll put it out as a CD. The goal is to make this show into a CD. I don't necessarily like to commit to making a show a CD  because I feel like that paints me into a corner, I like what i did last time where I just recorded it and sat on it for a few months before I had to listen to it. I think otherwise I would have listened to it and would have been like "ugh I hate the sound of my voice, gross". But yeah I'm looking forward to coming back and doing a bunch of material people haven't heard before since there wont be anything from any of my previous CDs.

COC: Speaking of performing comedy in L.A. and Chicago, is there a different vibe performing for those audiences? Or is comedy just comedy and it doesn't matter?
DT:  Uh, a little of both. I think people like to draw a contrast and say they are really different but it's really all in the mind of the performers. I think people complain about how neurotic L.A. makes them because there is always, as they put it "industry" in the audience. As opposed to Chicago where no one cares about your comedy except for fans. Out here there are people from TV watching and blah blah, but that doesn't really matter unless you make it matter, you know? It's still got an amazing amount of alternative venues out here. I feel like L.A. has really grown out here in the five years I've been hanging out and doing shows. There's way more places to go up and do a set of whatever you want and not feel like there is any pressure to meet standards... And you know I've performed for industry and they're way flexible about it. They'll be like "yeah you can swear, we don't care, we know we can bleep it out". Whereas in Chicago the perception of L.A. is really tight ass. Like "oh no there all gong to judge you if your not TV friendly" and blah blah. I feel like the problem in Chicago as far as not being industry friendly is that everybody hates themselves, they know there is no industry and they know they're not going to make a lot of money off it, so they do a lot of sets about failure and masturbating while crying. There is a little bit less of that out here (L.A.), but it's still here. I think the scenes are remarkably similar in that you can pretty much do whatever you want, you can go up pretty often if you commit to it, and there is a huge variety of places you can go, it's a little more spread out, and it can be more of a pain getting from mic to mic since it's such a sprawl, but I don't mind, I've been Lucky.

Be sure to catch Dan Telfer at the Mayne Stage (Saturday!) Dec 28th.