The bad news about the Chicago comedy scene is that veteran comedians eventually move away in search of better professional opportunities. That's just a realty. The good news is that there are plenty of talented comics waiting in the wings to step up to the mic (so to speak). Dave Helem is a good example of the up and coming, fresh faced, ambitious and hardworking talent that Chicago is producing right now. Dave's part of a new class of performers that's not waiting for anything to be handed to them, but instead is working to make opportunities for himself and others in the scene. He's performed at the TBS Just For Laughs Festival, produces his own showcase and is a regular at clubs like Jokes and Notes, The Laugh Factory and The Comedy Bar. Plus fe features and hosts at independent showcases and open mics all over town. Dave sat down for an interview where we discussed race, divorce, getting booked, hustling etc... Check it out. 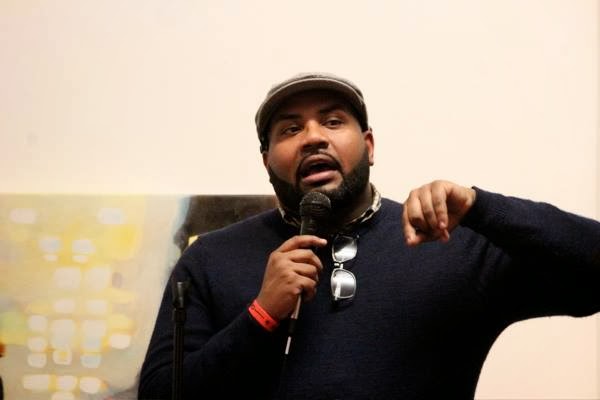 Comedy Of Chicago: We talked earlier tonight about how you started with the stage name
"Comedian Davey Boy Helem" but you Just changed it, what to and why?
Dave Helem: Just Dave Helem. That's what I was born as. I kind of feel like when I first came into comedy I didn't really have an identity of who I was coming up. When I started comedy on the north side for the first time it was just Dave Helem, but then I started heading down south and went to jokes and notes a lot and I kind of felt like I needed a cool  ass black name (laughs). Like "comedian hot chip" or some shit. But it's kind of like I wanna get to the point now where If I send you a clip of me and it says "Comedian Davey Boy Helem" I  don't want you to have some pre-conceived notion like that I'm on some  real like... How do I say this? "Black shit". I hate saying this because that sounds bad because I know a lot of "urban comics" who are funny but it's a  level of professionalism that your missing.... You know like LL Cool J is hosting the damn Grammys this year and you know what the fuck his name was for the show? It was was "LL Cool J". Your name is Todd Smith your 50 years old. Ice cube stop calling yourself Ice Cube your in your 40's... I don't wanna get stuck in that realm like that.  I wanna be like Dave Helem. Which is who I am. I think it works out best for me and for  want and for the promoters who want to book me on their show and not have people be like "OMG is this black night?" I just don't wanna get type cast into anything. I'm not really a  north-side comic or a south-side comic. I'm just a comic, so I feel like I don't wanna have any labels attached to me in any kind of way I just want to be able to be one of the few comics out here that's able to go from the north to the south and just do what I do. I can rock both  crowds so let me do it without a nickname. 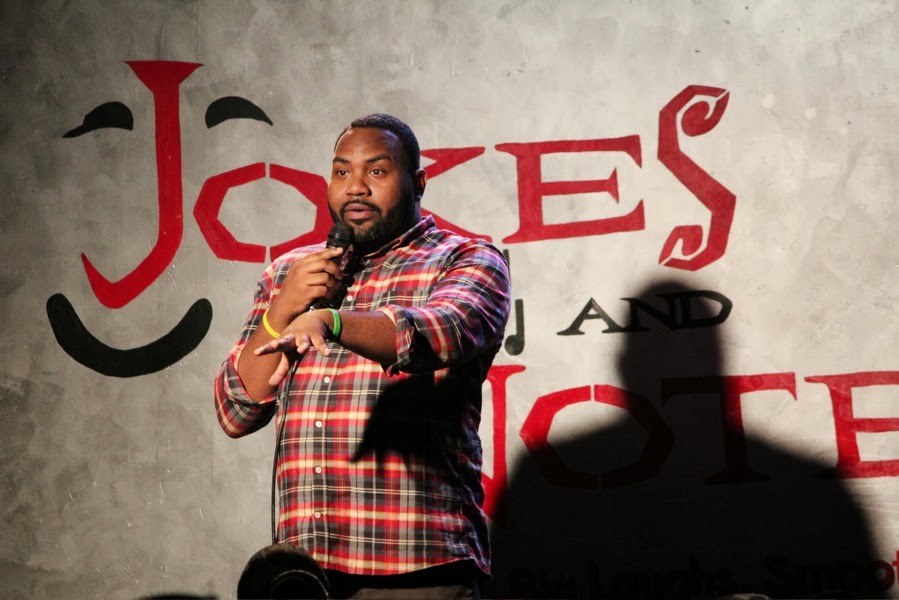 COC: So just how did you get started in the Chicago Comedy Scene?
DH: Well, I got  divorced, I was married for two years and you don't really  know how down and out you can get until you get a divorce and somebody says they don't want to be with you and vice versa. So I came up to Chicago, I had lived in Atlanta for ten years. I started having these ideas about what I wanted and after my divorce, I  was like "fuck it, what I got to loose at this point?" So I had a couple of  friends by the name of Clark Jones and Will Miles who I went to Morehouse College with and they had a mic called "Two Black Dudes and an Open Mic", I said "I'ma try it",  and I did. It went really really well. I actually, at one point, sat down on the stool and they were like "don't ever do that shit again" (laughs). But I felt very comfortable about my ability. I was like I could do this, I've always been a funny person, I like being in front of people as a teacher. Did you know I used to be a rapper in college.  My name was twig... cause I would snap on MC's. That ended like my freshman year but real shit, I liked being in front of people and talking and you know I've always been like the fat dude and the fat dude always has to be funny. If  wasn't a person who wasn't funny I'd be a virgin to this day. So I just like making folks laugh. 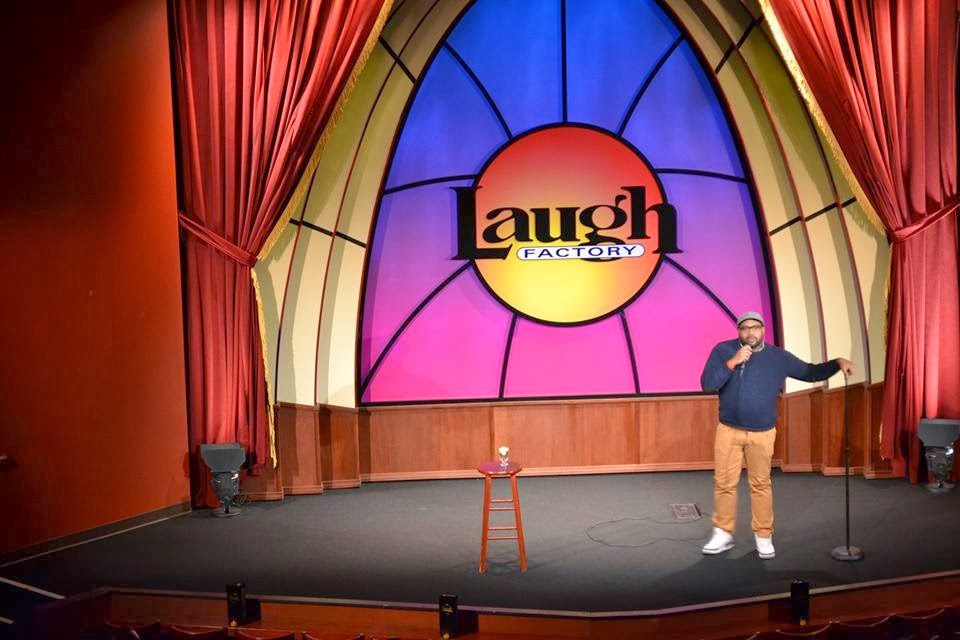 COC: Your getting booked all over town, what advice would you give newer comics, what's the
process, if there is one, for getting booked?
DH: I feel like the process to get booked is your availability, but first of all you've got be funny, damn everything else. You got to really do well, but in addition to doing well you have to be strategic about where you go. Because with comedy clubs  it depends on what you want. There are no other comedy clubs on the south side besides Jokes and Notes right?  So you if come here and you kill... you gonna get booked up here after a while. Mary's (Jokes and Notes owner Mary Lindsey) is gonna notice that, but for me personally I wanna see different opportunities for me... So I've made it a goal for myself to have people see my material at places on both sides of the city. And then you start emailing the promoters or the bookers of these comedy clubs, make sure you go to the showcases where you can come out and do stuff. I email them constantly and I'm like "YO what I gotta do?" If they still don't respond, I'm taking my black ass up there and be like hey "what's up?" Cause you not gonna deny me, I'm crazy. 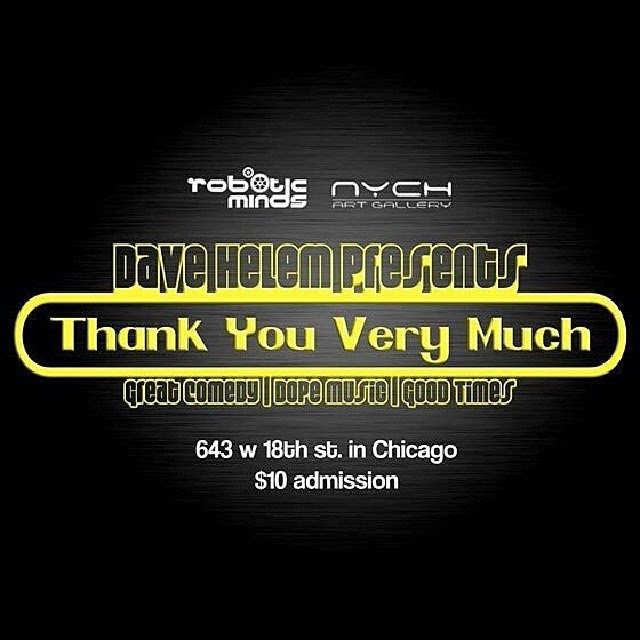 COC: You've got an open mic and a couple of showcases under your belt, you see yourself doing more producing?
DH: Yeah, I don't want to have any excuses about being held back in this scene. I'm  actually about to start up another room with three other north-side comics  maybe on a Friday night or a Saturday brunch type  show, just so I stay relevant and plus it's good to write and get on stage without having to wait at an open mic all night long, and not trying to sound like I'm arrogant but it is kind of a deterrent some times when you go to an open mic,  you get there when it starts, sign up and your already # 22. Now you have to try do the thing where you run to another open mics, but try to get back in time to go up at the first one... and  it all can get frustrating. So now I'm starting different spots where I'm able to take  the jokes I write, cause I write a lot,  I'm always throwing stuff out there and I'm actually getting to the point where I'm taking a lot of pride in my material because I know nobody else is saying what I'm saying. Not being cocky but once again just being honest, because it's my story you know?

There you have it... Be sure to catch Dave's monthly showcase Thank You Very Much (his birthday show) this Friday. The secret lineup is pretty stacked.