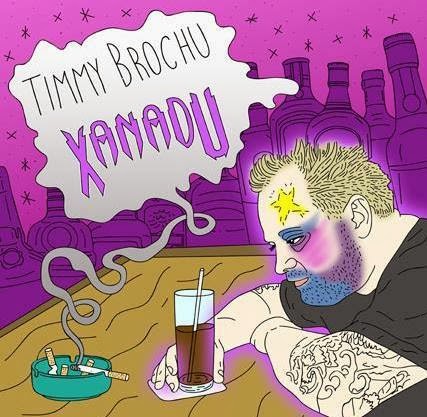 On Wednesday March 19th, Chicago comedian Timmy Brochu will record his first live album: "Xanadu". It's about time. The guys a real gem, well liked, respected and nobody works harder. Timmy's been performing stand-up comedy for about 8 years, but we first met in 2009, and in the 5 years since I've known Timmy he's been an absolute stalwart in the Chicago comedy scene. Not content to just be a comedian waiting for stage time to be handed to him, Timmy is also a prolific producer. He co-produced the legendary but now defunct shows Rotten Comedy (had some insanely good times at that spot) and Chi-Town Comedy, and currently co-produces two hot showcases (Stand Up Throw Down & Make Your Self At Home) and a popular Open Mic (The Mic With No Name).

For the album recording Timmy plans to perform about a 45 minute set and is chomping at the bit to get his point of view out there. Timmy had this to say about the upcoming recording. "I wanted to get my stuff out there. The way I've been writing and performing in the past year are exactly what I always had in mind for myself creatively. A lot of the newer material started to lend itself well to working with a lot of my older material and finally come to a point where I could combine them into a lot of great chunks of material. Themes began to develop, a timeline of my life and experiences emerged. I realized it was time as I've never felt stronger as a performer. I've prepared by getting it all down on paper in those chunks, and working them out as such on stages all over the city. I took notes more and listened to my recordings. I'm chomping at the bit to do this for the first time"