Queer Comedy - The Next Gen Interview... 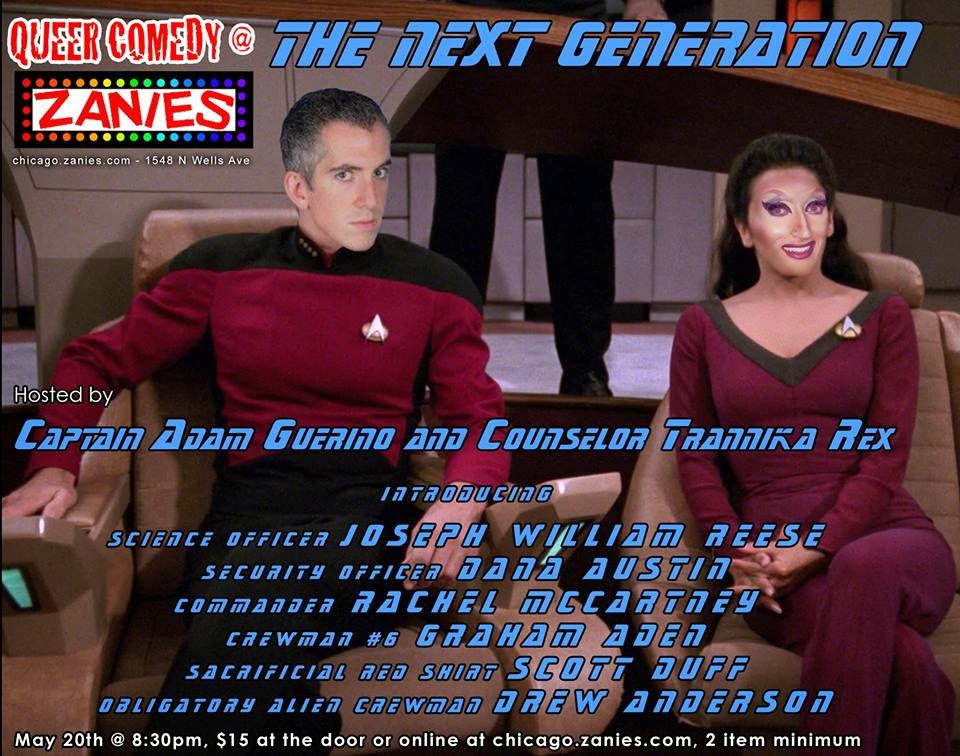 After nearly three years of producing queer inclusive shows, Queer Comedy at Zanies has put together quite the resume for a local showcase. Proof that high quality comedy sells itself in any market, Queer Comedy has found solid success by bringing in some of the best talent from around the country. The Advocate , the Chicago Tribune, Timeout Chicago, The Redeye, the Chicago Reader and many other local press sources have all sang it's praises. The secret is in the booking (as in all good shows). The QC lineups/comedians have had appearances on Conan, Comedy Central, Chelsea Lately, The Late Late Show, BET, TBS Just For Laughs, SXSW, Comedy Bang Bang, A Night At The Apollo, and Last Comic Standing to name a few. This months showcase (May 20th - 830PM) is looking to continue the winning streak and will debut several strong newcomers to the Zanies stage. In an effort to highlight some of this months talent, producer and co-host Adam Guerino interviewed Graham Aden for a Comedy Of Chicago exclusive. Check it out...

Adam Guerino: How did you get started in comedy?

Graham Aden: I broke a New Years resolution. I wanted to try doing stand-up, and I'd heard that Cole's had a good open mic, so after half a bottle of champagne on New Years eve I resolved to go up the next Wednesday. I even had all my friends from the party lined up to come watch. But then the next day when I started trying to figure out what I was going to actually say on stage, I realized I had no idea what to do, and I wound up completely chickening out. But I didn't want to lose momentum, so I signed up for stand-up 101 at second city. The class was really helpful, but honestly the best thing for me was being able to perform with other people who were trying stand-up for the first time too and were scared just as shit-less as I was. Even so, going up in front of those seven people in folding chairs in a classroom was one of the hardest times I've ever had going up in front of an audience.

Paradoxically, the thing that really helped me get over that fear of being on stage was bombing (and the first time I bombed really horribly was at Cole's, actually). But once you've bombed, you're free, because you've already done the thing you're most afraid of, and you're still alive. Everyone bombs. Huge, famous comedians still bomb. Successful comedians are the ones who know how to dust themselves off afterwards and keep going.

AG: Who are some of your comedy heroes?
GA: I first got into watching stand-up by binging on Margaret Cho and Ellen DeGeneres specials on DVD with my college boyfriend. Eddie Izzard, too. More recently I've been into Maria Bamford, Tig Notaro, and Beth Stelling. I don't think it's an accident that a lot of those comedians are queer or gender-nonconforming, but that's by no means the only thing I like about them. The comedy that I love the most is honest and weird and captures something true and unique about life. Comedy is this magical thing that can turn your worst fears and embarrassments into a moment of happiness, into something to laugh about. I think it can be an incredibly powerful tool for building connection and acceptance, too: it can bring people together and let them laugh about things that might otherwise divide them. If you can laugh with someone, you can accept them, and if you can laugh at your own pain, it doesn't hurt as much anymore.

AG: What is your favorite type of gig/audience?
GA: I really like hosting, and I love interacting with an audience, so small crowds that have a lot of energy are great. Queer audiences are really fun, because there's less explaining to do. They usually just get it.

AG: How would you describe your sexuality?
GA: Reluctantly. I think sexuality is really interesting, but I wish there was more trying things out and less labeling going on. "Gay" can be just as limiting as "straight" if you let it. I also think it's a bit arbitrary that we identify sexuality based on gender categories. I mostly like other guys, but just being a dude isn't going to automatically make me attracted to you. Being snarky, smart, and enjoying frozen pizza and crap television is a way better start.

That said, I'm pretty into dudes. Sorry, Jennifer Lawrence. If you could stop texting me when you're drunk, that would be great.


AG: If you were elected to represent a certain group, what group would it be?
GA: Teen moms. I'm not a teen mom, but I know I would do a fucking amazing job representing them.

Graham Aden is a comedian and writer living in Chicago Il.