The Best Showcase in Chicago?

Chicago is filled with tons of talented comedians and every night those comedians divide into diverse little groups of six or seven and put on a comedy show in the back room of a bar or the coat room of a club or the prep kitchen in a Greek restaurant. Most, if not all of these shows are fantastic. Self-produced, self-promoted, and self-booked by some of Chicago’s top talents. While these shows are important and the backbone of the comedy scene; I want to shine a light on an under appreciated comedy showcase. It’s in a little room at the corner of Broadway and Belmont called Chicago’s Best Standup at Laugh Factory Chicago.

I know what you’re thinking. Laugh Factory is a corporate giant that caters to tourists and people out-of-the-know. It’s an evil empire where creativity and “real” comedy goes to die. I get it, but it’s just wrong. Unlike the other clubs who are booking touring headliners every weekend (which is what a comedy club is supposed to do) LF Chicago is doing something different. Laugh Factory Chicago has figured out how to sell out its 311 seat theater every weekend without touring headliners. People are lining the rafters to see Chicago talent. 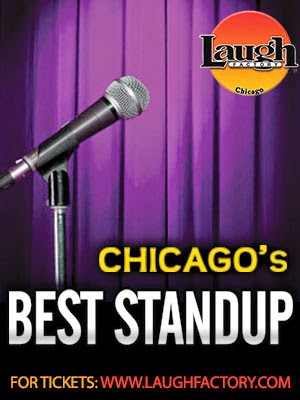 Customers are paying the same money they’d pay to see names like Chappelle, Ansari, Maron or Silverman, and instead are seeing names like Kallas, Morrow, Arcuri and Shanker. And no one is complaining. Look at our schedule. 90% of our shows are Chicago’s Best Standup, a showcase featuring exclusively local comics. That’s unheard of in the club scene. But in a city like Chicago, with a talent pool as big as ours, it’s changing the way clubs outside of New York and LA work. We are using the whole pool.

There’s a wall in the Chicago office on which the names of hundreds of Chicago comedians are written, from paid regulars, to guest spots to open mic showcasers. If you’re doing standup in Chicago, your name is probably on this wall. Each showcase is carefully booked to give the audience a vast and unique look at what Chicago comedy has to offer. I’ve seen almost a thousand of them and I’ve rarely been disappointed. Still not convinced? Well to hedge my bets, I got myself a Danny Kallas quote, "Laugh Factory showcasing mostly local comedians is easily of one the best things to ever happen for Chicago stand-up comedy. If at least one other club followed this style, I honestly think many comedians would think twice about leaving for one of the coasts so quickly." Nice, right?

Now, as you may (or may not) know, you can see these same comedians for free at hundreds of thousands of other comedian-produced showcases on Clark St. alone. So why come here? Because this show is an experience like none other. There’s a sensation that’s hard to describe when you see someone you know crushing in front of a huge crowd. It’s electric. The crowd and the comic feed off each other. If you consider yourself part of the “scene” and haven’t seen a show at Laugh Factory, then you are missing out on something incredible. As a comic, to watch your friends perform on that level reminds you why you’re doing this. It can really shake the stink off of a week of rough open mics. I’m not making this argument because I work here. (I probably am a little.) I’m doing it because I feel selfish when night after night I watch the best showcase in Chicago and the audience is filled with everyone except the Chicago comedy scene.

Now here’s the important part... The money. Comedians typically don't want to shell out $20 for a show. I understand. But here’s a pro-tip: Every comic that performs here typically has a 10 person guest list. That’s 6 comics and 2 shows a night which means there are 120 complimentary tickets that you are missing out on. You have no excuse to not be here. I’m not shitting on other showcases, the Greek Restaurant Prep Kitchen Comedy Hour will be just fine. I’m just saying if you want to experience Chicago comedy, you have to experience the whole thing. Keep Chicago the hub for national talent by supporting local comedy at every level.