Evolution of a Sh*t Show

The Shit Show comedy showcase has been a work in progress for a few years now. It started as a weekly open mic that had aspiring and seasoned performers come and try out new material. The premise behind the open mic was to have safe and fun place where people interested in performing would have fun in a supportive environment. When I first decided to try open mics and get rid of my stage fright, I found that the scene wasn't always the most welcoming and supportive of new comics.

Since a lot of the same comics frequented the same open mics it was easy to see that they forged friendships with each other which made it more intimidating for someone who was new and was starting out in standup. Running a show by yourself is one of the hardest jobs someone can take on so when Ever Mainard and I decided to do the open mic together the idea was to start a fun open mic where comics would feel comfortable trying out whatever material they wanted with no judgments and the show’s personality started to evolve into the show it is now. 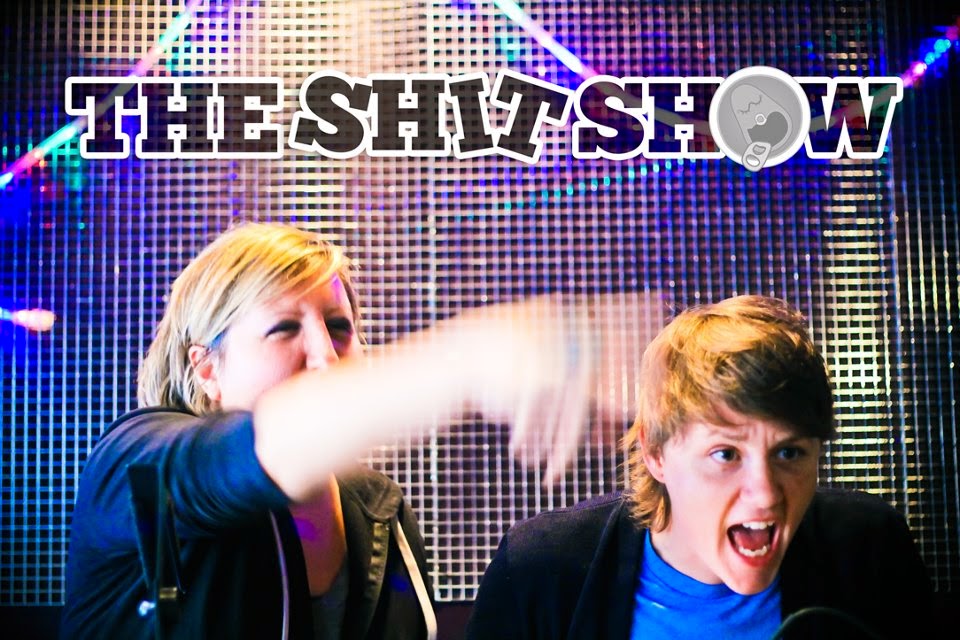 We had already been giving out random prizes to those that performed, which could have been anything random that was tossed on the table that held the mic’s spotlight (thrift store desk lamp) or a bottle of Winking Owl wine from Aldi. We wanted comics to feel rewarded when they did well and come away with something tangthible that night.

With the open mic, it was pretty simple, we had an open mic every week so we didn’t really have time to promote the show or get press so we weren’t able to get comics the non-comic audience they deserved. After doing the open mic for a couple years, there came a point when we both decided that we had to either move the mic forward or walkaway, which is when we decided to make the show a monthly comedy showcase.

We took the weird shit that we used to do with the open mic and brought it over to a showcase format. The newest asset we brought with us to the showcase was the concept of a Hotdog Man. After Keith Paesel performed at the open mic and talked about being a hotdog that passed out fliers, we thought it would be stupid not to ask if he’d like to be our new show’s mascot and pass out shots to the audience. Hence, the Hotdog Man. 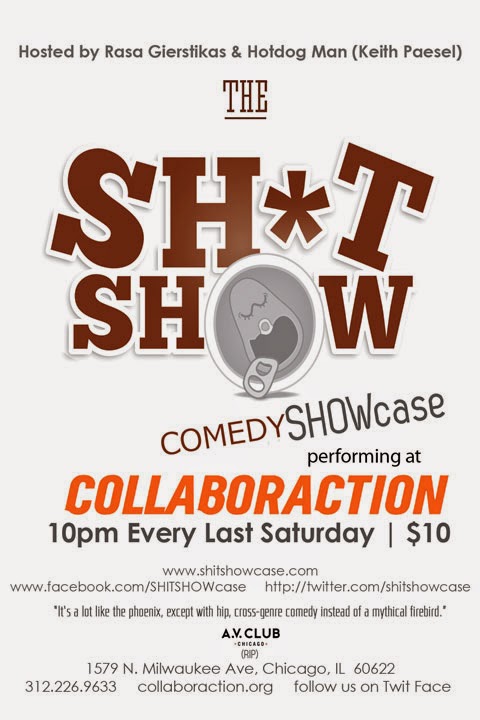 Turned out that the audience really got into the Hotdog Man, Dollar Tree prizes and the random holiday decorations and Christmas lights we had during the show, it gave a real sense of a broken down party. The benefit of having a monthly show opposed to a weekly show was that it gave us the freedom to start exploring different options of how to grow the show. We knew we had something unique to the Chicago comedy scene and we were getting a lot of positive feedback about what we were doing with the show and we wanted more people to know about it.

We were diligent in reaching out to liquor and other types of sponsors. We started emailing press and requesting reviewers to come check out the show to help increase our visibility and give us credibility as a comedy show. When we first switched the mic to a showcase we kept the same venue that we held our open mic in, which was a blessing and a curse. The blessing was that we were able to grow the show’s audience (since there was no cover and it was the deadest bar on the street) and the show’s personality.

The negative was that we brought anywhere from 60-120 people to the venue and were in the negative financially every month since we didn’t get any return on the money we put into it. Everything has always been paid out-of-pocket except for when a liquor sponsor was involved. Then we would receive liquor donations every month which helped get the liquor brand more visibility too.

Ultimately, The Shit Show’s motto has become “Shit or get off the pot”. When it was an open mic, we needed to either power forward or let the show die. With the venue, it was should we keep being at a space that doesn’t appreciate everything we do or should we look to another venue that will let the show’s personality stay true to itself and actually make some money to put back into the show. So the decision was made to move the show to Collaboraction Theater, where we could get some return on what is put into the show. So far, it seems to be a good fit for the show’s personality.

The life of producing a show has it’s benefits and it’s detriments. There’s really no real logic of why you stick with a show since it takes up a lot of your time and can at times cause a lot of frustrations and make you feel defeated but there’s this compulsion to just keep moving forward and hopefully it will all pay off.

The idea for The Shit Show is always to make the show seem seamless but there’s a lot of work for it to seem like a real shit show. The most rewarding part of having a great show every month is when the comics and the audience genuinely seem like they had fun and give positive feedback. With the show we want there to be a balance in that the audience shouldn’t feel threatened and the comics aren’t being heckled by the audience.

The most natural transition for this last topic is the creation of “Best Joke!” When a comic does really well and the audience is laughing, we encourage them to chant “Best Joke!”. The comic that wins a “Best Joke!” gets a prize. What we noticed is with “Best Joke!” we’ve never had any serious issues with heckling. It’s a great way to channel the audience’s energy and turn it into a positive as opposed to a heckle.

With the positives there are a fair share of detriments that can really make you want to throw your hands up and walk away. Our biggest obstacles are finding press, sponsors and additional revenue for the show. The process of having a show, if you really want to have a successful show, never stops. It’s a lot of trial and error to see what works and what doesn’t, figuring out all the different angles you can try to get the show more and more exposure and keeping the show fresh and diverse (in terms of talent). The ultimate goal is to grow both the Chicago and LA show. Ever moved to Los Angeles last year and brought The Shit Show format with her. We’re hoping to build a multi-city show.