My 3 Weeks as a Female Comedy

So, let’s start from the beginning. A few months ago I got really fed up with my pursuit of standup comedy. I was out one night and went home in a cab disgruntled and thought to myself “I’m done.”

My definition of done is kind of stupid. I still will go up from time to time if someone asks me to come out and do a show or something. I liken my current pursuit of standup comedy to The Undertaker or Triple H, I don’t do every show, but will come out for pay per views.

Fast forward about two months, I get fired from my job and was sitting at home. I was knocking around the idea of performing as a woman character. Now, I am lazy and don’t really own wigs or woman’s clothing… so I decided to make a character online before I ever performed as her. I made up the name Brittany Heldson and decided to go for it.

It’s actually surprisingly easy to find stock photos of women of all kinds on the internet. I lucked out and found a huge stockpile of photos from a burlesque performer from Missouri by just Google searching “circus headshots” (Brittany’s background was a circus/burlesque performer).

I uploaded some photos and started adding friends. You’d be surprised how many people will add you if you just add them. Seriously, I had zero friends and within one day I had one hundred. People who had never met me just click “accept”. People even friend requested me... So, I guess people just like to have more friends? I’m not sure. 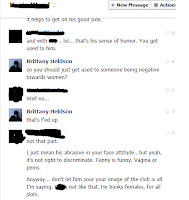 I then decided to troll a little bit to see what kind of reaction I would get. I joined the comedy forums on Facebook and I made some pretty stock “new comic” mistakes that aggravated some “established” (I use that word lightly) just to see what kind of response I would get and to make it seem like I was actually real. I barked that people were being "sexist" just to see the reaction it would garner.

If you haven’t ever asked comedians stupid questions and watched their reactions, you should. There is so much unwarranted anger and ass backwards narcissism and self-righteousness that it’s much more comical than a lot of their material.

There were nice people though…

After establishing a “new comedian” presence I sat back and waited for some reaction.

I also added a picture with cleavage...

Now, I’ve hung around the “scene” enough to know that every male comic is guilty of trying to have sex with new female comics. Every man is guilty of this. You are involved in something that takes place at night in bars, so add some alcohol and there’s bound to be flirtation and things like that. 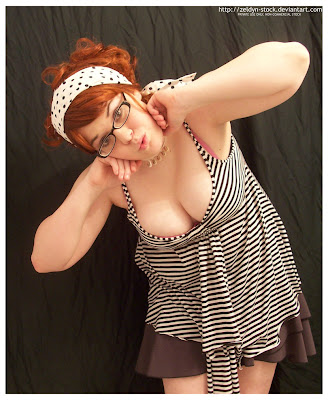 The thing that gets me is how dudes actually go about this. The only thing I can liken this too is the “casting couch”.

Guys will first approach you and ask nice things like “new to the city?” or “new to comedy?” and then they will offer to show you around the city… and then it gets to the “hey I’m trying to fuck you” portion of the conversation.

As a man, I know I’ve done the exact same things in the past. But it kind of took me pretending to be a woman to know how shitty that must feel.

Women in comedy or in any career or art form must feel like shit on a daily basis. Conversations seem to take a 180 degree spin from “helpful, let me give you some insight” to “you’re gorgeous”.
I’ve read feminist blogs about comedy and the way women are treated and I've had my opinions about such… but being a fake women who hasn't even done an open mic yet and experiencing this was kind of crazy to me.

I don’t necessarily believe flirtation and trying to pick up a woman is wrong whatsoever… I just feel that as men, we should probably be men. We should not be "quid pro quo" about every aspect of our interactions with the opposite sex. So long story short, I kind of blew off the dude who called me gorgeous.

I let a few people in on the secret to build some credit for my fake self and also have a place I could comment and cause some disorder on Facebook. I saw a post in one of the Chicago Comedy forums and commented on the post… to which I received a lot of backlash.

This backlash resulted in being called a “fat bitch” and having people say “fuck you, you're fat” in response. I thought to myself “wow, if I was a woman who had just moved to a city to pursue something and this is the response, I’d probably develop some kind of disorder.”

Again, there were nice people...

I understand the “R” rated nature of standup comedy and that people lash out in certain ways… but again, we are not really being men are we?

I know a lot of fat men and I know a lot of fat women who probably would hate their lives if someone lashed out at them in such a way online. You’re all kind of really big dicks… We all are. What I gained from this troll account was something I had seen a million times but never was on the receiving end of. I got legitimately mad and upset that my fake character was being shit on.

I guess in the universe of Brittany Heldson, she gave up standup comedy and went to a more accepting art form of performance where she will experience similar sexism and exclusion to new comers because we live in a world that is kind of cruel… But she will prevail because with time people accept, you kick ass, and make friends, and move forward.

I am not going to get all Dustin Hoffman in Tootsie on you guys, but really, I can see how and why there are always articles on “the difficulty of being a woman in comedy” being written, just a little bit better.

Not every male comedian is a sexist pig... not every male comic is going to try to fuck you. That's just not a reality... this was just an observation. When you start off with dicks waving in your face, you need to kind of chop them off and fight your way through.

What’s next for me? I’ll think I’ll invent a gay black man.