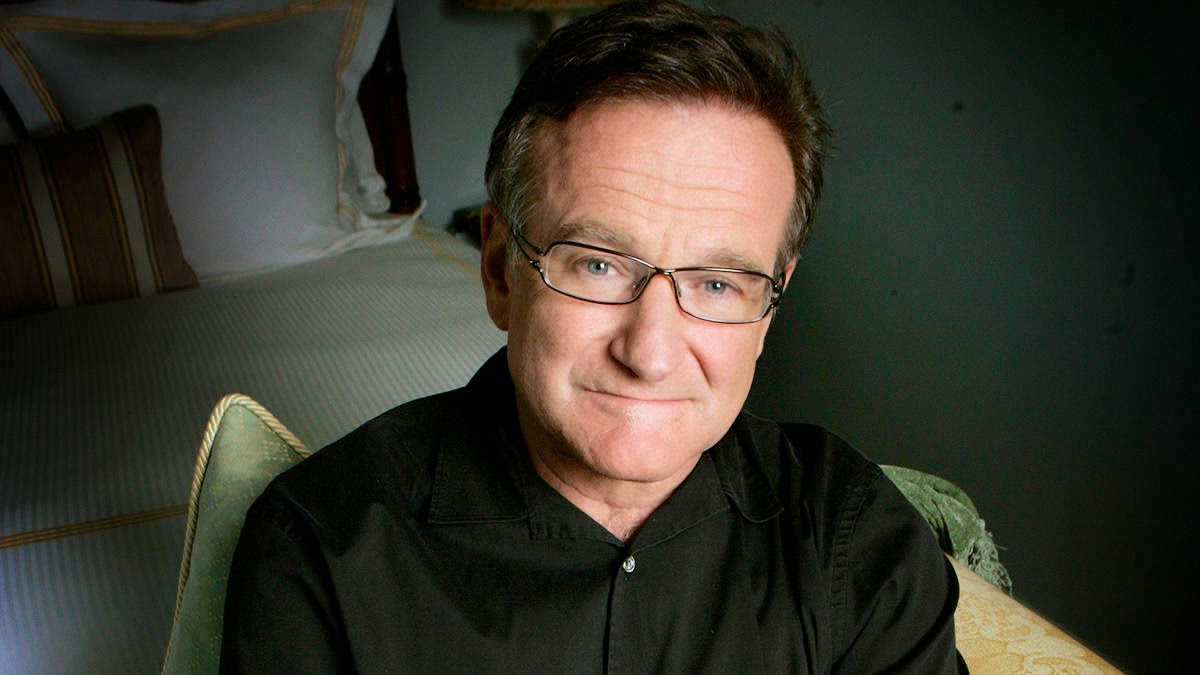 Robin Williams died Monday, I met him once briefly, sat with him at a show here in Chicago. It was truly awesome, here's how I remember it...

It's a strange thing to say, but I remember exactly the most exciting text message I've ever gotten in my life. It said: "He's here. He is sitting with me" - Quickly followed by: " Come over. It's just us. I'm freaking out."

I must have read them fifteen times and minutes later I was inside the faux wood paneled, someones Grandma's basement, perma-dim of Town Hall Pub on Halsted, sitting at a little round table with my brother and one of our child hood heroes, Robin Williams.

We had heard that Jena Freidman, our friend and the host of Entertaining Julia (Sunday night at Town Hall Pub where we often performed at and never missed) had befriended the legendary comic, and the word was he might swing by. He had been around Lakeview, performing with local comics while in Chicago to do Ellen, but there was really no reasonable way to assume he would be there among the early evening Halsted jubilators, two day drunks and Wrigleyvillians. Not at Town Hall, where the lost boys and girls that made up the performers of Entertaining Julia were ourselves, often surprised with what we got away with… It just wasn't really thinkable.

So when my brother Mark, a singer songwriter who was to be the last performer that evening, went early to set up and test sound, it was with little expectation he would find himself alone with the man whom had, time and again, enveloped us from a small TV while we lay on our stomachs on the family room floor in Ohio.

I walked in, and though I've never known myself to be particularly nervous around people, was kind of a wreck. He was eagerly polite and was quiet and self contained and he looked not a little uncomfortable. I got up to get a drink almost as soon as I sat down and like a fool, I asked one of the most publicly embattled substance strugglers in pop culture history, if he wanted a drink - christ almighty I'd blown it already. He laughed once loudly, an outburst, and then replied, "I do, I want ten, but I'll take a coke." I brought him a coke, he already had one but accepted the second and I felt not so much a bafoon because he was so kind. Soon, mercifully, as the place filled up with Chicago comics and their friends, Jena started the show. 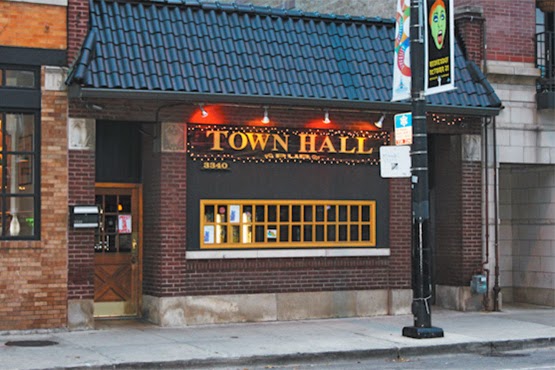 I love Town Hall Pub, it has been a home to me for many years and I truly cherish the strange Sunday Night Church of the Lost, that is Entertaining Julia (still bartended by the show's patron saint, Julia Pishko, and still the one of the best shows in the city). Back then nearly everyone I knew met there on Sunday night. Daniel Cooper, local Blueman, my best friend, and drummer in our band that constantly attempted to turn the place out, and Gerrit Lewis who would eventually found Pipeworks Brewing Company, and dozens and dozens of comics, many of whom are working prominently all over the country today. I actually had an inside joke with our crew referencing Ginsberg, in Howl, "I've seen the greatest minds of my generation destroyed by pitchers of PBR, a good juke box and a dark room with a microphone," or something like that, I was much younger and apparently way into quoting the beats? Yikes. Anyway, I can't specifically remember everyone who went up that night, but I do remember watching Williams watch them, and being wildly proud that he was getting to see Chicago's comedic weirdos in their element.

Every major metropolis is a cultural center and has an artistic community, but I think it is the rare combination of storied tradition and a irreverent disregard of such, that creates the environment for an art form to grow. Groundbreaking comedy is one of Chicago's finest characteristics and it sure doesn't start in movies like Groundhog Day, it ends up there yes, but it starts at places like Town Hall Pub. I'm not a comic, but like I said, I was proud of everyone. 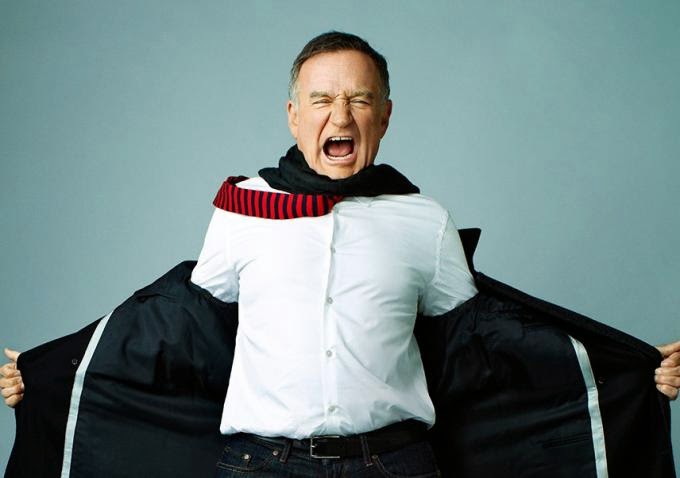 Williams delighted in the performers that night, who, like always at EJ, varied in experience age, race and gender. He cackled at Puterbaugh Sisters, nudging those of us next to him with each increase in vulgarity, and he seemed truly awed to find two young ladies completely willing be every bit as filthy as he himself had been known to be. The same was true of Jena, who's deadpan, "you guys" before every joke, always made the audience guilty by association whenever she inevitably, casually (and hilariously) trivialized AIDs. I remember he seemed genuinely grateful to her for the invite! I remember him marveling how funny he had found Hannibal Burress' the night before at the Lakeshore Theater and throughout, he laughed, was attentive, and full of genuine support every time a new performer went up. I noticed something else too, he laughed at their jokes, the way we all did, because the room was electric with excitement and it served the comics well, but when he really laughed, when he boomed, it was because he was thrilled, by what they were trying to do, he was so visibly empathetic and understood comedy so deeply, that he was watching their actual endeavors. One time, when a joke fell very flat, he howled and said, "the balls on that one."

Something I will absolutely never forget, is when my brother got up to play, Robin became silent and as Mark, started to play he grew stiller, and as Mark began to sing, I remember his eyebrows raising as he turned to look at Mark's girlfriend Emily... she just nodded. It was one of the most proud moments of my life. Robin Williams, impressed by my younger brother. He listened to the whole set, and on two occasions made up lyrics in Spanglish and gently, ridiculously, danced a salsa while sitting down. By the time Mark (who had been near vomit nervous and had to pee the entire show) finished there had been a second wave of people who arrived shuffling, panicked and squeezing, on the heels of the text messages of revelation they had no doubt received from friends already present. So when Jena made mention of an elephant in the room, named Robin Williams, the room was insanely crowded and all had begun to let themselves hope that maybe he might take the small eight inch step up onto that dirty carpet stage.

Robin Williams walked to the front of the room and as his feet hit that stage he was off. Sure I'd grown up adoring him, sure I'd rented Comic Relief specials on VHS over and over again, sure he was the Goddamn Genie and Mrs. Doubtfire and Dead Poet Society made me feel cool for loving books, and yes I'd worn out my copy of Good Will Hunting, all true. But that was Hollywood, that was the movies, it was, we all knew, set up, on some level an illusion. And then right in front of my eyes, it wasn't.

He was like lightning. Elemental. He rose from the excitement that had been building all evening like a benevolent Poseidon upon a sea of laughter. The Puterbaugh's had left dozens of props strewn about the stage and he must have used every one of them twice. And when my brother darted past the stage, finally succumbing to nature's call, he stopped and yelled, "Hey brother! You were fucking awesome!" After that, well I just went batshit (and incidentally, my brother used that quote on the backside of his Album). He crushed, and then re-inflated and crushed again, and we were, all of us, comics, musicians, drunks and misfits, kids rolling on the carpet in the family room, enveloped by Robin Williams.
I realize now, that part of the man's magic, perhaps his truest magic, was that in that chaos, he made you feel safe. His empathy was palpable, however unlikely, it was mutant, huge. Whatever madness was happening, he wasn't there to hurt you, he was there with you, to be joyful, awed and amazed, at our miraculous ability as humans, to be silly.

The worry with a story, is that once you tell it, you lose the way it was and remember it the way it was told, and maybe, that moment becomes a victim of exaggerating tendencies, and I've heard the phrase man created laughter because he alone endures suffering enough to need it. But I don't know of Robin Williams suffering, I didn't know him, and I'm still not convinced I should write any of this down out of fear I'll corrupt the moment. What I do know, is that I saw him entertain my friends in a tiny bar in my city, and I saw them entertain him. I saw him be big, bigger than I've ever seen anyone be and be small and shy moments later. I'm sad he's gone, really sad, and maybe we have, or will, see the best minds of our generation (or our parents' or our country's or whatever) destroyed by madness, starving, hysterical, naked and so on... as far as Robin Williams goes, at least we saw it, and him, hell, if you were there you know, I could never exaggerate him anyway. I could tell you he turned into a Genie and flew us to
the moon and back and it really wouldn't be untrue.
Contributing Writer: Bobby Minelli