THE SH*T SHOW PRESENTS: THE PRODUCERS! 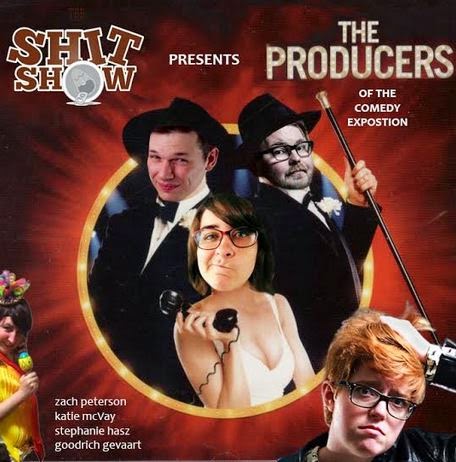 The Shit Show comedy showcase, which was a featured part of The Comedy Exposition of 2014 comedy festival, has always been a little bit ahead of the curve. It's development into a staple of the Chicago comedy scene has been a work in progress for a few years now. Starting as a weekly open mic (at the very lame without it, Shambles bar on Division) and then reansforming into a monthly, standing room only, free for all at it's current home at Collaboraction Theater (smack dab in Wicker Park).

The shit show has always been pushing envelopes for performing in a fun and supportive environment... So the fact that they are featuring 4/5 of the producers (All solid Chicago comedians in their own right) who just pulled off a wildly successful DIY comedy festival in that was started in response to corporate comedy giant - The JFL Festival abandoning Chicago, makes perfect sense. Half party, half show, The Shit Show features everything from Dollar Tree prizes to drinking contests. If you have not checked this wild best out, Saturday is the perfect opportunity.

What they’re saying about The Shit Show:
Chicago Now - “enamoring"
Red Eye - "comedy extravaganza”
The Onion - “A lot like a phoenix, except with hip, genre crossing comedy instead of a mythical fire bird”.