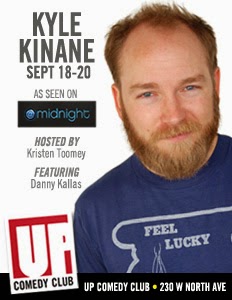 From the suburbs of Chicago to living in Los Angeles, Kyle Kinane (performing this week @ The Up comedy Club) has an impressive resume of performances that include the comedy festivals of Vancouver, Leicester, Washington D.C., Portland, Aspen, and Just For Laughs Chicago.

Kinane has two recorded albums to date: Death of the Party and Whiskey Icarus. His TV credits include: Last Call with Carson Daly, The Very Funny Show on TBS, The World Stands Up on the BBC and a part in Judd Apatow’s Funny People. Oh, and he’s also the voice of Comedy Central. Given his busy schedule, Kyle was cool enough to spare some time for a quick Q&A.

COMEDY OF CHICAGO: You played in punk rock bands growing up with dreams of being a musician. What instrument did you play? And how do you feel about comedians who incorporate music in with their act?

KYLE KINANE: I "played" guitar. I wouldn't say I gravitate towards musical comedy, but there are some folks who do it well, and I'm a fan of anything done well. Nick Thune, Garfunkel and Oates, etc. There's a group called the Fringe Riders in L.A. who always crack me up. If it's good, it's good, regardless of genre.

KK: Most everyone from my generation in Chicago emulated Dwayne Kennedy at some point. Hedberg was a big influence early on. Patton Oswalt. Maria Bamford.

COC: You started in Chicago, and then you moved to L.A. Having been in L.A. over 10 years and knowing what you know now, when do you think is the “right time” for a comic to move to L.A.? 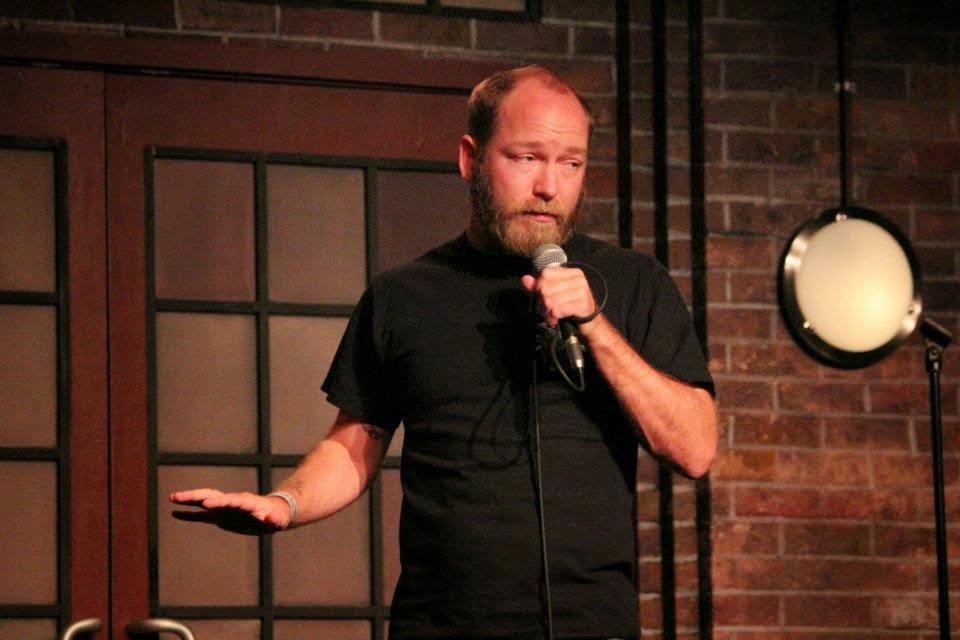 KK: There's no right time. Some people move early on and hit it off right away. Some people stay in Chicago (or wherever) for too long, have a kid, and don't see standup being a logical career pursuit anymore. The average would be when you think you've maxed out your potential in your home city. But more often than not, people think they're ready before they really are.

COC: How come you moved to L.A. and not New York for stand up?

KK: Winter. I fucking hate winter. Always have. I know it's not an enlightening or introspective answer. But mentally I would shut down all winter, and that's bad for everything, not just comedy. My relationships suffered, my well being suffered, etc.

COC: I really enjoy the “Escaping the Suburbs” bit when you say “I can’t even believe I made it anywhere creatively, because I was raised by two loving & supportive parents...and nothing squashes creativity more than unconditional love & support from a functional household.” Why do creatives need terrible things to happen in their lives in order for them to be great?

KK: They don't need it, but having something to work against can really make you sink or swim instead of just float along. Having someone tell you "you can’t do this" can make you assign a value to things, as opposed to thinking "Hey, everything's available to me, so I don't have to really try."

COC: And for comedians, the more of a loser they are, the more they DON’T have their shit together—the funnier they are. But does it always have to be like that for it to be good?

KK: It doesn't always have to be like that. There are plenty of well adjusted people who are funny comics. But connecting over shared faults is always easier to laugh at instead of shared victories. Laughing at shared successes kind of makes you seem like a dick.

COC: Growing up in the ‘burbs, it is more common to go into a “normal” and socially accepted profession such as doctor, lawyer, engineer, etc. When you pursued comedy, did you experience any backlash by the people you grew up with? Did it make you an outcast?

KK: There wasn't backlash. Maybe some people thought it was foolish. But I also didn't grow up with a lot of people who were going to be doctors and lawyers either. It's not like we were all smart enough to have all the doors open to us. If you found something that made you happy, then you went for it. Im not saying we were dumb, but the disease of contentment affected a lot of us. 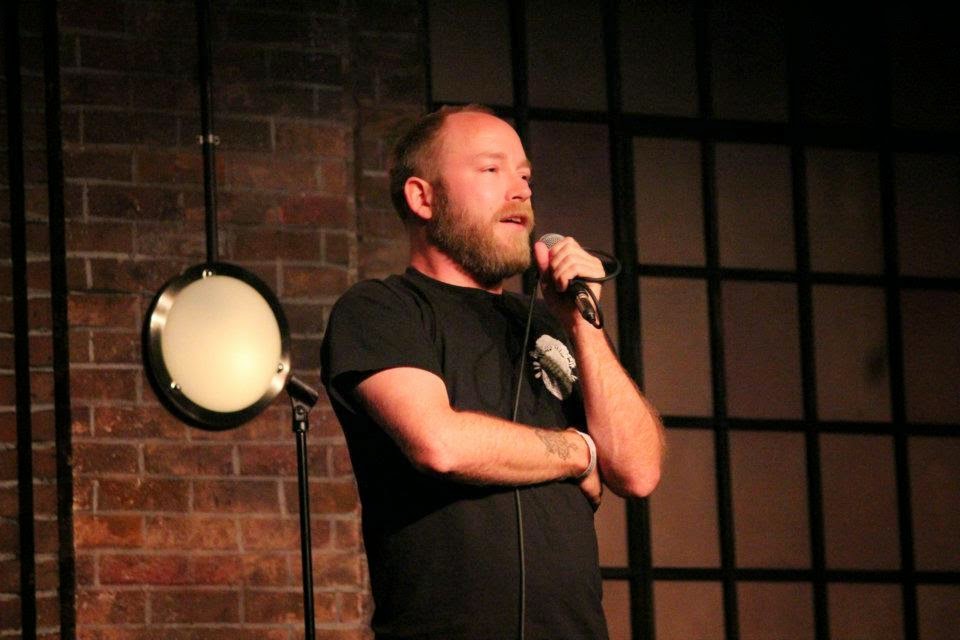 COC: What terrible struggles have you had to endure/overcome throughout your own comedic journey?

KK: You ask yourself after ten years if it's worth it. But there's no terrible struggles. I'm not an inner city youth fighting to make it out of a gang infested neighborhood. I'm a straight white guy from the suburbs. There's no struggle.

COC: You joke about drinking and how it got you into trouble. Comedy is a profession surrounded by alcohol, and drinking is a slippery slope that many do not recover from. What has been the key for you, to keeping your career together?

KK: Drink after the show, not before.

COC: Has the beard & the harsh, raspy voice always been your thing? Or was that something that took you a while to figure out during the “finding your voice” journey?

KK: Everyone says you find your voice in comedy 8 to 10 years in. I don't know. It's just a fucking beard.

COC: Do you think you’ll ever get rid of the beard? Or is the beard too significant for your image and persona to where you’re almost stuck with it? 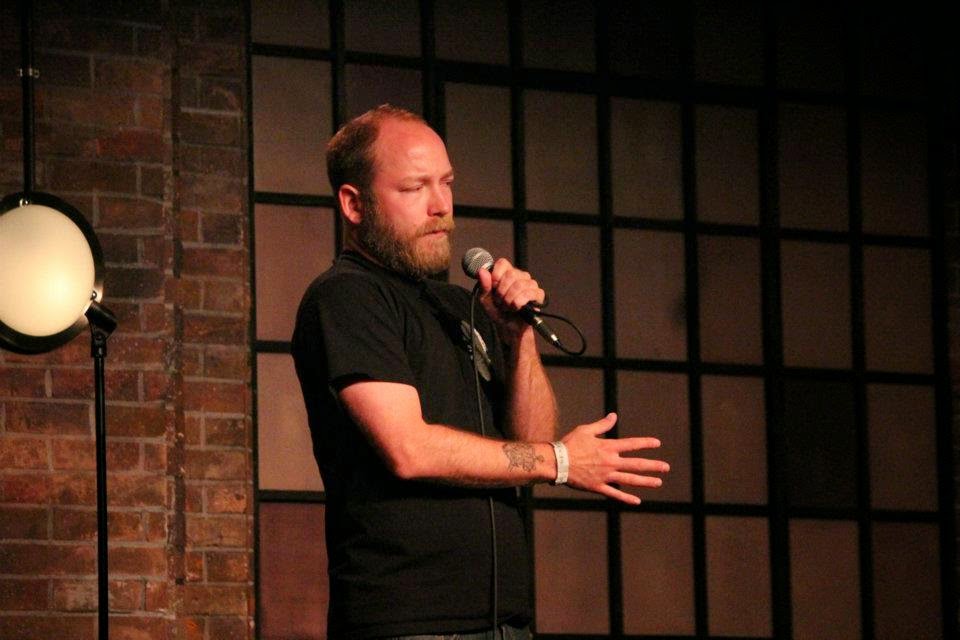 COC: How has your career success thus far changed you as a person?

KK: Yeah. I live alone instead of having roommates now. I can buy dinner for my friends when we go out, which feels nice. Especially since they were the ones picking up the tab when I was broke. I get to return some favors.

COC: In regards to fame & success, we always hear how as a person becomes more famous, they become more isolated. Why do you think that happens?

KK: I don't know. I wouldn't consider myself famous or successful yet. I get to make a living off of being a comedian, which is great. But I also put in 15 years, so I think I'm getting out of it what I put into it.

COC: Final thoughts / words of wisdom for other comics?

KK: If you love comedy enough to do it for free forever, then you're on the right track. If you think it's going to pay you back with fame and fortune, and that's your motivation, then quit now and get the fuck out of the way. You're wasting stage time the rest of us need.