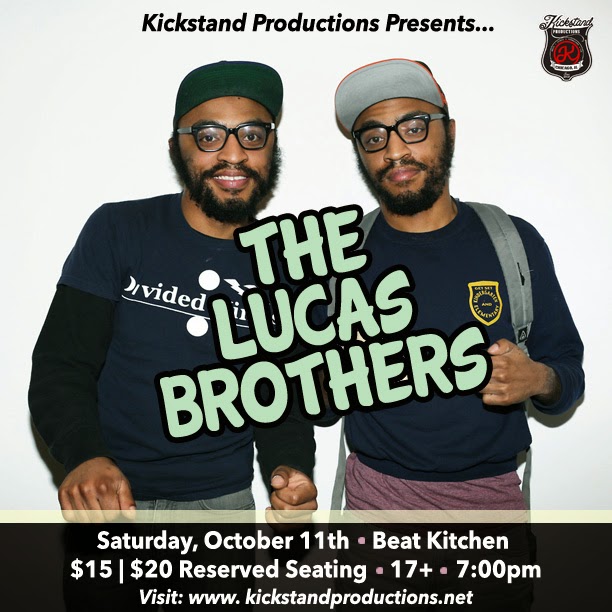 The Lucas Brothers (Keith and Kenny Lucas) are identical brothers. They are also a hilarious stand-up comedy duo. They will be in town Saturday Oct 11th & if your a comedy fan we suggest you be there (click here for your chance to win free tickets) because in the last four years the brothers have... as they say, blown the fuck up.

With mainstream movie cameos (22 Jump Street), TV deals a plenty and a national comedy tour (The Purple Urkle Tour) which they are currently on - the Lucas bros. are set to capture Americas short attention span.

The Lucas Brothers are also the creators of the animation series Lucas Bros. Moving Co. on the Fox network which came about from a late night appearance on Jimmy Fallon. The show is described as a fantasy/surreal comedy that revolves around identical twins Kenny and Keef Lucas (voiced by Kenny and Keith Lucas, respectively), who run a moving company smoke pot and get into trouble where, we assume, hilarity ensues. It's already been picked up for two additional seasons. Check out his clip from Comedians You Should Know last time they were in Chicago.

On top of all that they host "The Super Late Morning Show" on Comedy Central, and currently will be staring in the new sketch comedy show “Friends of the People” which they co-created and will executive produce. The show premieres on TruTV in October and according to www.trutv.com the show will "provide a fresh and unique take on sketch comedy, with a combination of man-on-the-street segments, scripted sketches and more". The show will star The Lucas Brothers alongside comedians Kevin Barnett, Jennifer Bartels, Jermaine Fowler, Lil Rel Howery and Josh Rabinowitz. Here's another clip of the brothers from High Times.


The Lucas brothers have built up a ridiculously stacked resume in just few year with appearances on Late Night With Jimmy Fallon in 2012, Arrested Development (Netflix), Comedy Central’s Adam Devine’s House Party, HBO's Funny As Hell, NBC’s Stand Up for Diversity finalists, as well as standouts on the New Faces show at the prestigious Montreal “Just For Laughs” Comedy Festival.

The Brothers will be in Chicago Oct 11th, at the Beat Kitchen. The show will probably sell out so get your tickets while you still can.