As I sat around looking at my laundry list of topics, subtopics and tangents I wanted to address concerning the subject of standup comedy, the one I think is most important to get to before even thinking about getting started with anything else is the term “clean”. What does it mean exactly?

I’ve been around a long time and this has always been a major point of heated discussion to the point of bitter argument. The term itself is rather cloudy, and has a different meaning to everyone who uses it. It’s like describing a potential blind date’s looks to a friend using the word “cute”.

There’s a whole lot of room for error there, and probably more grey area than actual black and white. What it boils down to is basically a judgment call, and everyone ends up thinking they are not only the judge but the jury and executioner too. I have often seen these decisions end poorly. Before I offer my opinion on this topic – and it is deeply rooted and well thought out – I would like to make extremely clear that I am NOT trying to censor or squelch anyone’s creative process in any way. I am in full support of freedoms of every kind, but especially of the artistic variety.

If anything, I’m one to encourage the stretching of boundaries and to challenge creative people to constantly grow and expand new horizons. This is not about moral judgment either. I couldn’t care any less from a personal standpoint what anyone chooses to do or say to express themselves. It’s not like I haven’t heard it all before. My childhood was chock full of every imaginable way to use foul language and then some. My father rode with a biker gang, and that’s not exaggerated to make my point. The vast array of hoodlums, scoundrels and roughnecks that hung around then didn’t bother to edit their language because children were around. We heard it from an early age. 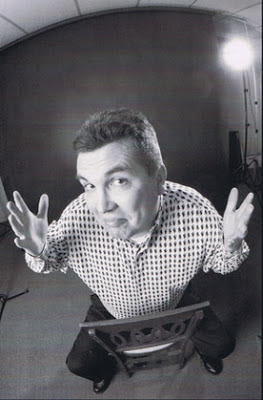 Most of my childhood was spent being raised by my grandparents however, and even more off color than all of the bikers combined was my 5’2” German grandmother. She was a virtuoso with vulgarity, and when she let loose with one of her tirades bikers would cover their ears in horror. I want to go deeper than just talking about a few four letter words though. “Keeping it clean” is a lot more than just the avoidance of using the seven words George Carlin got arrested for saying on stage at Summerfest in Milwaukee in 1972. It’s knowing where the line is, and not crossing it.

As a performer develops, straddling that line can add delightful comedic tension to a show and I’ve seen comedians do it masterfully. It can be a thing of beauty when executed properly, but an extensive amount of stage experience is needed before venturing off into that high risk territory. Until then, it is my very strong opinion that ALL new comedians should avoid not only the use of “off color”, “dirty”, “salty”, “blue” or “foul” language – but also be extremely careful of what topics and premises they choose to approach on stage. Natural instinct often tempts and attracts a new comedian to be “edgy” or “naughty”, but those instincts need to be pushed back for a while. I’m not saying it has to be forever, but until one learns the fundamentals of the craft of standup comedy there is absolutely zero need whatsoever to engage in a number of topics. It’s asking for big trouble that doesn’t need to be, yet I’ve seen it happen again and again over years and years. It would be like giving a two year old a loaded pistol with the safety off and then telling him to “be careful and not get into any trouble with it”. How effective would it be? A new comedian has more than enough to deal with in that first year without adding dangerous explosives to the mix.

Still, there are always people that vehemently fight me on this point. They’ll bring up examples of several comedians old and new that have become extremely successful being ‘dirty’ or ‘blue’, but those people forget that the comedians in question all had to learn how to be comedians first. Let’s use Richard Pryor and George Carlin as prime examples, as those are two names that I’ve often had thrown in my face. A lot of newer comedians don’t even know who either one of those people are, and if that’s you, you’ve got some homework to do. You need to study both of them. Watch and enjoy their later work, swear words and all. That was the way they chose to express themselves, and I have no problem with it. Then, go back and look at their early work to see their starting point. It was very different from where they ended up, but they earned a right to evolve. Rodney Dangerfield is another example. There are recordings of his earlier work that are about as different from his later work as pork chops are different from karate chops. Everyone who has been a comedian for years has evolved, and you will too. Be smart and master all the basics first.

There are far more important things to focus on when starting out. You need to gain experience in a variety of areas, and that only comes from being on stage. Stage time should be work time in my opinion, and a well thought out plan should be in place to make the most of every single time you perform. There’s no stage time to waste, as there is more competition now than ever before.

There should be smaller goals in play at all times, but a long term goal should be to eventually appear on some sort of network television. Although network standards have dropped quite a bit through the years, they still don’t allow the use of ‘the big ones’ when it comes to swear words. Cable networks and the internet are much more lenient, but there are too many people with lots more experience fighting for the attention of a limited audience. Coming up the ranks it’s hard to get anyone to pay any attention at all, so why risk the chance of offending anyone with language or content? It’s not smart business, and that’s the reason I feel so strongly about keeping it clean.

Subject matter is another important choice. Stay away from disgusting whenever possible. I’ve seen new comedians go off on hideously grotesque tangents with vivid descriptions of the bowel movement or bloody discharge they just experienced, then come off stage bragging how “clean” their set was. Just because one doesn’t use swear words does NOT mean a set is either clean nor does it mean it’s ready for network television. In the future, you just might be the one from your generation that’s compared to Pryor or Carlin. For now though, you’re a ways off. Keep it clean. 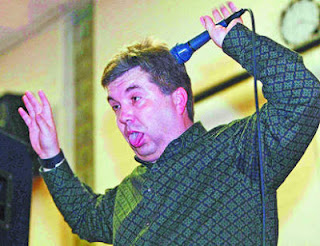 Now does that mean I am suggesting every last punch line out of your mouth has to include the words “and our Lord and savior Jesus Christ?” Of course not. I want you to be free to explore the topics you want to explore. There are ways to make almost any topic funny – INCLUDING SEX. Again, I’m not trying to censor anyone and sex is a huge topic in both life and comedy. There’s a lot of potential for big time funny there, but I don’t think it’s a wise choice for beginners. There are a lot of potential pitfalls, and without sufficient experience launching into a routine about sex would be like running through a minefield wearing big blue clown shoes. It raises the risk factor. It’s much smarter and safer to start out with topics that have little chance to offend the majority of people who will be in your audience – which unfortunately is not likely to be many at first. An unnecessary detour into dirty or disgusting is a great way to alienate one’s self from an audience. It’s an even better way to alienate one’s self from getting asked back to open mics or getting an actual paid booking. No headliner I have ever met ever wants to follow a dirty act. NONE. It sets a definite tone for the entire show, and if an audience isn’t into it for whatever reason it can make things a whole lot more of a challenge than they need to be. Why even make it a tiny possibility?

Using ‘the words’ or talking about sex or body functions in detail should be used with extreme caution – especially by those in their first few years in comedy. There are innumerable things that can go very wrong by doing this and scant few if any that can go right – including getting laughs. The laughter a new comic might get on occasion by being vulgar is not a pure laugh that comes from delivering a solid well written joke. It’s out of nervousness that an audience may happen to laugh, and it won’t be sustained very long. It’s a great way to burn them out early and infuriating all those who have to follow it. Make no mistake by thinking getting a laugh makes it acceptable.

An effective way to decide what may or may not be a subject to approach on stage would be to look at your time on stage as meeting someone new for the first time at a party. What would your opinion be of someone who brought up some sordid intimate detail about themselves right away? Hopefully, a big red flag would go up. People need to get to know each other at least a little bit before the heavy artillery is brought out. The same is true with standup comedy. There’s no need to launch into some long ugly painful diatribe about how your uncle touched you when you were six – even if there are no swear words in it. Comedy should make an audience laugh, not squirm.

There are more than enough usable subjects to tackle that are loaded with potential punch lines that will keep any newcomer busy for several years. This is part of paying one’s dues, but it does not have to be unpleasant. In fact, it can be extremely rewarding to come up with material that is clean and able to be used in any situation without fear of censorship or reprimand from anyone.

If nothing else, remember that keeping it clean will be the fastest way you’ll be able to get paid for being funny both as a writer and performer. You can evolve any way you choose later on, but for now three powerful and time tested words to hold next to your heart are “clean makes green”.