If your a Chicago comedy fan and have been following this site for a bit, you probably already know about Cameron Esposito. Few have demonstrated such an amazing work ethic and become as much of a Chicago comedy success story as Cameron. After being a relentlessly hard-working comedian in Chicago for years, she relocated to LA where she was soon called “  the future of comedy” by none other than Jay Leno.

In addition to her work as a nationally touring headliner, Cameron has appeared on Late Late with Craig Ferguson on CBS, Late Night With Conan Obrien, @Midnight, NBC’s Last Call with Carson Daly, IFC’s Maron, on Adventure Time on the Cartoon Network, and as a regular on E’s Chelsea Lately and Pivot’s TakePartLive. She has appeared at the SXSW, Moontower, Bridgetown, SF Sketchfest, and JFL Chicago and Montreal comedy festivals. She just released her comedy album Same Sex Symbol which quickly snagged the top spot on iTunes and begins her accompanying national tour (IN CHICAGO 10/14). It’s been a busy week.

I (Adam Guerino) sat down to chat with Cameron about the album, her tour and being a shark. Enjoy

AG: Firstly, congratulations are in order as you're about to start the national tour for your number one comedy album Same Sex Symbol. Tell us about the album and tour, what can listeners and audience members expect? 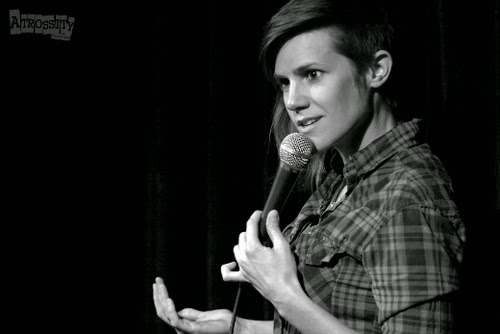 CE: Thanks so much! I'm extremely proud of the album; it's the work of many years on the road and countless hours of stage time. Probably I'll think it is awful and hate it enormously in two years - that's what I love about stand-up. Like a shark, you have to keep moving or you will sink. Like a shark with a microphone.

AG: Imagine telling yourself at your first comedy show that you'd have a number one comedy album and a national tour today, what do you think newbie-comedian-you would say?

CE: Oh probably like "Yeah, no prob. When? Ten months from now?" If anyone knew how long it takes and how much work it is to move any distance in this field, no one would do it, myself included. I was attracted to stand-up as an nontraditional career path. I loved the idea of not having a boss. Of course, that isn't true. I'm my own boss. And I'm pretty difficult to work for.

AG: Does success make you more daring or cautious with your material?

CE: Both. The exact same amount of both. The bigger your reach, the more negative attention you attract. I don’t actually know how really famous comics do it - you become a lightning rod for feedback, not all of which is based on anything beyond "Your head is dumb looking."

AG: Almost as long as you've been a comedian, you've taught comedy. With nationally touring, teaching a regular comedy class might be hard to maintain, how do you flex your teaching muscles?

CE: I write a column for The AV Club about my life as a stand-up that reflects a lot of the views I have expressed to students over the years.

AG: If you were to draw a road-map for comedians with 3 major points between starting comedy and a national tour, what would they be?

CE: 1. Do the work (open mics, shows, writing, repeating)
2. Be kind as possible to those around you
3. Do the work

AG: Thanks for taking time out to chat Cameron!

For all those reading, Run, don’t walk to the internets and buy her new comedy album here:

AND snag tickets to her Chicago show on 10/14 before it sells out:

Contributing Writer Adam Guerino
Guerino is a producer, writer and nationally touring standup comedian based in Chicago. He's been called a “comedian-producer-genius” by Chicago Reader and is also the creator of Stand Out: The National Queer Comedy Search which partnered with The Advocate Magazine to give queer comedians national exposure, Outloud Chicago which for over three years has brought queer inclusive entertainment to mainstream Chicago venues and The Rainbow Connection Queer Comedy Tour which combined gay, lesbian, bi and trans comedians for a cross-country tour. Check out www.adamguerino.com for more info!
Newer Post Older Post Home