How I Learned to Love the Bomb 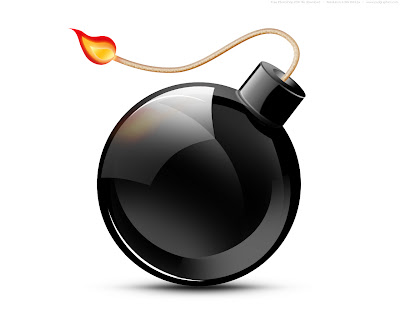 Everybody bombs. It’s part of the comic’s experience. Every one of my heroes in comedy has plenty of stories of failure on stage, and when told from their perspective they are often really entertaining bits. Bombing is wonderfully universal but also horrifyingly singular. In my short comedy career, I've definitely bombed my fair share at open mics.

One thing I've learned recently is that how you respond to not doing well is what can make a bad set (almost) a blessing. There are several reactions a comedian can have when no one is laughing at their jokes, and I think I’ve done all of these at least once.

1. Anger: When no one laughs at a joke or a bit that you think is really funny and you respond with a “fuck you guys!” or (even worse) ending your set early and storming off stage. Yes, I have done this. I am incredibly embarrassed about it, but I think its something a lot of comedians go through, either that or I’m just the worst.

2. Excuses- This is a trap I’ve fallen into often. When you have a set that doesn't go well, and you decide to blame it on the audience or other mitigating factors. While factors like crowd size, mood of the room, how late it is on the list, certainly affect the amount of laughs you get, there’s no point in even trying if you’re just going to ignore the results based on those variables. There’s something to take from each set, and if you’re going to negate an experience just because it didn't go perfectly your way then there isn't really a point.  The first time I ever went to Coles, it was Cameron Esposito’s last night hosting there. It was a really emotional night for a lot of people, and there were some sets that ended in tearful tributes. I had to follow one of these sets. I went up nervous, having barely ever done comedy, and not fully understanding what was going on. I completely bombed, and thought to myself it was just because it was a weird night with a beloved comedian leaving. However, I still should have reflected on how I could have made it a better performance, and believe me, there were a lot of things to improve on.

3. Taking it in stride and learning from it- This Is the best way, in my humble opinion, to handle a bad set. Sometimes I've found that commenting on a bad, in a self-deprecating way but without displaying anger or feeling pathetic, is a good way to get a laugh while bombing.

Most of all, what I’ve been trying to work on personally, is sticking with it in a bad set. It’s my personal goal to try and do everything I planned on doing that night, and not just abandoning a drowning ship. I guess that’s my point in this: Go down with the ship, do whatever you can, and learn with it. Just make your sets not as long and boring and un-watchable as Titanic.