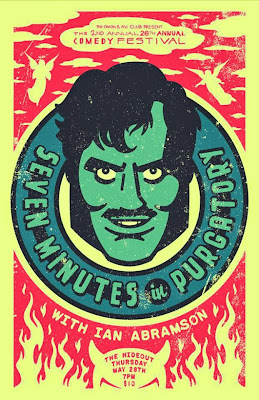 Lately the term “experimental comedy” has gotten tossed around a lot in the Chicago comedy scene, which can be confusing because the label is vague. But ultimately, in my opinion it's any type of live comedy that breaks traditional convention of a stand-up comedian just doing a straight head performance of prepared material and bits. This can be anything from slinging jokes blindfolded to performing crowd work while jumping rope. Sure it might sound a little gimmicky, and some comics definitely think this art form is hard enough without new hurdles thrown at them. But like it or not experimental comedy has struck a cord and more and more showcases are incorporating new quirks and non- traditional formats. So here are 5 of the best experimental shows in Chicago.

Honorable mention: Seven Minutes in Purgatory: (Technically this show is not just in Chicago anymore but definitely deserves a mention) Seven Minutes in Purgatory, produced by Ian Abramson and Matt Byrne, is a comedy show where comedians perform their material directly to a camera alone in a soundproof room. Ian has recently moved to L.A and brought the show with him where it's getting an amazing response (SXSW, Funny or Die, AV Club) with recent performances by Kylie Kinane, Rory Scovel and Beth Stelling. You can catch SMIP back in Chicago on May 28th as part of the The Onion & AV Club 2nd Annual 26th Annual Comedy Festival.


5. Late Late Breakfast at The Hideout: One of the funnest shows in town. This "Saturday afternoon hangover" comedy show takes the potentially boring convention of your standard open mics and turns on it's goddamn head. Frenzied challenges, crazy games and spontaneous performances keeps the comedians (and crowd) on their toes.

4. Sean White’s BEEF at High Tops: Beef is a comedy roast on LSD. It's takes the standard insult show format and turns into a insane game show hybrid. Comics get pitted against each other 1v1 in various games where they have to try to burn the other opponent based rules they have no idea about until they arrive. Best of 3 rounds by audience vote wins. First Friday's at 9. 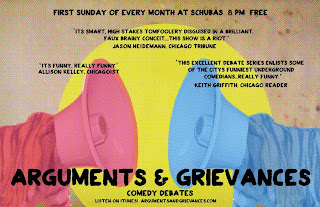 3. Arguments and Greviances at Schubas : A&G is a live Comedy debate and podcast featuring comedians debating dumb topics topics as “McRib vs. MacBeth” and “Hugs vs. Drugs” with audiences choosing the victor. One of the funnest shows in town. Every first Sunday at Schuba's Tavern in Chicago.

1. The Social Take Over @ Laugh Factory Chicago: In a nutshell: Chicago comedians take over audiences members social media accounts. The show starts off normal enough - three comedians do short sets to warm up the crowd... but then it gets real and they bring volunteers on stage and hack their Facebook pages etc. Hilarious. - Everything from sudden marriage announcements  to pregnancy scares, all live on stage. Every Wednesday.