Laughing So You Don't Cry 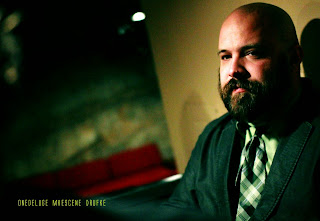 “Hey guys, here’s the worst thing about getting divorced … I now have to leave the house to
disappoint people.”

This is a joke I’ve been telling onstage for about two months. To me, this is one of the funniest things I’ve ever written. It’s cute and self-deprecating. I like the little twist. It’s a fun short little joke shell to lob into an audience and hope for a nice laugh explosion.

And yet, it never gets the laugh it deserves. The joke does well enough at open mics, but that doesn’t count. Often, the only people there are other comedians, and they’re just waiting to find something dark and painful to laugh at.

In front of real audiences, sometimes paying audiences, that joke flies over like a lead zeppelin, one which is possibly piloted by John Bonham. Most of the time, it’s met with resolute silence. Every now and then, there are groans. Sometimes, at the worst times, it’s met with the super-pathetic, “Awwww…”

I know this joke is funny. So why doesn't it work?

Guys, this is a blog about comedy. But it’s not especially funny.

For the past seven and a half years, I've been doing stand-up comedy in Chicago and the outlying suburbs. I love it. I mean, I love it. I try to work as hard as I can, and with a little luck, I’ve been fortunate enough to work with some incredibly talented people and have some pretty amazing experiences.

Last night, I was walking out of a club in Glenview and found myself walking behind a couple who were at the show. Now, it is important for me to tell you that I didn’t think the night went particularly well - the crowd seemed kind of tight, and it never really seemed like I had any real momentum.

So you can imagine my shock that as I’m walking behind the couple, I hear the woman quoting punchlines from my act. This is as good of a feeling as a comedian can get.

Comedy has been a true blessing in my life. As I tell anyone who will listen, I don’t think there’s a better version of myself than the version of me onstage. I feel like I’m able to be more confident, like I’m better talking with people, and that most people like me once they get to see me tell jokes for a while, even if it’s only for a few minutes.

I guess it’s no surprise to anyone on the first night I was alone after my wife left me, I went and told jokes.

Ok. Real quick history in case you need it. 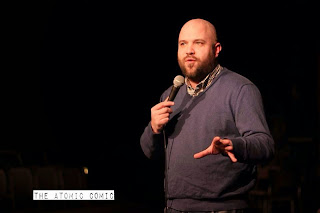 I met Katy when I was 13 years old at camp. For people who want to know the definition of love at
first site, I recommend you take a time machine back to 1992 and look at my teenage face. Years of unsuccessful pursuits followed.

In 2001, we started dating. In 2004, my son was born. We were married a year later. She moved out in October 2011. There are stories and details and all kinds of things that could probably fill the internet if I sat down and worked really hard at it, but I don’t think that’s fair to Katy or my son and I really just don’t want to talk about it anymore than I certainly already have.

If you want more, consult your local library. Or just get me drunk at an open mic.

So, how does one go about doing comedy when you feel like a pile of shit who’s responsible for ruining a marriage? It’s tricky.

For starters, I had a lot of material about my marriage- write what you know and all that. I know comedians who will write material about their girlfriend, and then after a break-up, all they had to do was change the noun to “ex-girlfriend”.

But all of my material was about how much I loved being married and how amazing my wife was. That’s not exactly material I can roll out, especially since my plan was to start writing new material about getting separated.

For example, I wrote this joke one night while she was sleeping next to me: 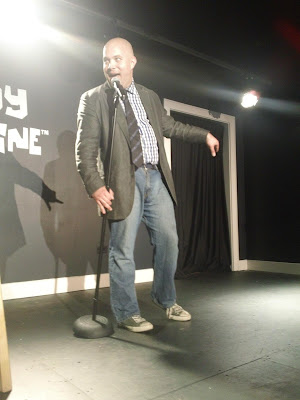 “I don’t like the word ‘separated’, because it doesn’t feel accurate. I don’t feel like that word describes what’s happening with us, two people who still love each other and just don’t want to be married anymore. To me, when I hear two people are separated, I picture what the police have to do when Big Mullet punches Little Mullet inside an Olive Garden while other tables stare nervously into their tiramisu.”

Funny or a pile of pain surrounded in a humor veil? You decide. Though you should probably choose the latter.

Anyways, so now not only is the woman I swore to love forever leaving me, but she’s taking 12 minutes of my material with her. This doesn’t seem like anything a judge would allow as fair.

A few years before that, I was really trying to find interesting ways to express myself onstage. A lot of that had to do with really looking deep into my insecurities and self-loathing. I was really looking into the things I didn’t like about myself and trying to find ways to put a smile behind them. The pinnacle of this came when I was hosting a show in Elgin and my set list just said:

So, clearly, I have issues.

The first time I went onstage after Katy moved out was Halloween at The Comedy Shrine in Aurora. I knew it was going to be a rough start because not only was I doing a whole chunk of brand new jokes (which I knew had, at best, a 40 percent chance of getting any laughs at all) but there was one other thing that I knew might hinder my success.

Most of these people, some of whom I was very close to, didn’t even know that I was having marriage troubles. I don’t know why I didn’t tell them earlier, and any reason I give to try and justify it just seems weak and shallow.

Onstage, I do what I normally do at open mics. I open with a couple jokes I know will work well in order to get the crowd prepared. By the time I’m ready to go into new separation material, I know it’s going to be rough. I have a white-knuckle grip on the mic and another white-knuckle grip on my drink. I’m stuttering and stammering and can feel tears welling to my eyes. No matter how funny my jokes were, I was not going to do well. 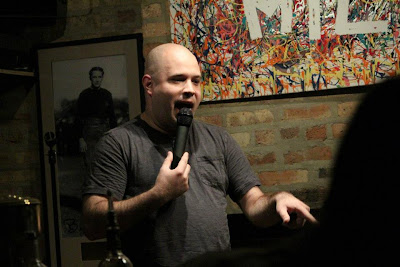 I don’t even remember getting offstage that night. What I do remember is looking into the eyes of Ashley, one of the employees at The Shrine. With tears in her eyes, she hugged me. I don’t remember the rest of that evening. All I remember is the kindness of a good friend, and a kind embrace I can still feel sometimes.

Doing jokes about the separation and the divorce are the hardest thing in the world. The main reason for that is that it forces the me that’s onstage to be vulnerable, emotional, and be willing to admit that there’s more than the confident, capable persona I project - that I get depressed and sometimes am not able to overcome all of that with a few jokes.

But without comedy, I don’t know where I’d be. I’m able to take all of the embarrassing stories and experiences I’ve gone through in the past 18 months and turn them into something we can all laugh at.

I’m able to take away the power of my demons by turning my insecurities into something I’m mocking instead of letting smother me. It doesn’t always work, but I’ve learned a few things. First, it’s always better to be honest. Secondly, you have to learn to laugh at your pain. Or else you’ll just end up crying blood.